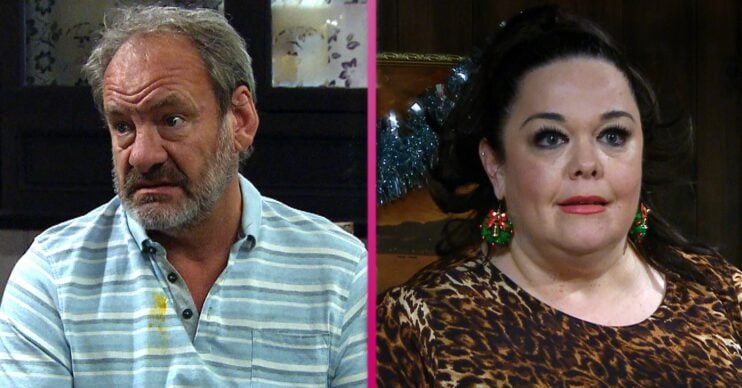 Is it over for Jimmy and Nicola?

Earlier this year, Jimmy was driving his truck when the glare from the sun got in his eyes. This caused him to lose control of the truck and crash into Mandy and Paul’s wedding barn.

Paul and Liv were in the barn at the time. Soon afterwards Liv managed to escape and the barn exploded.

However Paul, who had been abusing his son Vinny, was killed.

Over the last few months, things have got bad between Jimmy and his wife Nicola as they had to deal with Jimmy’s charges, their struggling business and battling with Carl’s mum, Juliette, for custody.

This week, Jimmy had his plea hearing and he didn’t want Nicola to come.

Although he planned to plead guilty, Mandy managed to talk him out of it.

After coming back from court, Jimmy went to see Mandy and he admitted he was scared and she tried to comfort him.

Read more: Mark Jordon on Holby City: Who did he play on Emmerdale and why was h arrested?

He thanked Mandy for being there for him and when she told him that’s what friends are for, Jimmy responded saying: “You mean a lot more to me than that.”

Mandy was shocked by Jimmy’s words. However fans weren’t impressed and slammed the soap, saying they ‘couldn’t think of anything worse that Jimmy and Mandy together.”

I can’t think of anything worse than Jimmy and Mandy together. This is even worse than Bob and Laurel’s affair. Just make it stop. #Emmerdale

Are you serious Emmerdale? Are we really going there with that stupid storyline with Mandy & Jimmy? #emmerdale

Emmerdale: What’s next for Mandy and Jimmy?

Mandy urges Jimmy to fight for his marriage. However, when Jimmy tips up to a row between Nicola and Juliette, things are made worse when he appears to take Juliette’s side.

Later Jimmy tells Nicola that he wants to move out and Nicola’s world comes crashing down around her.