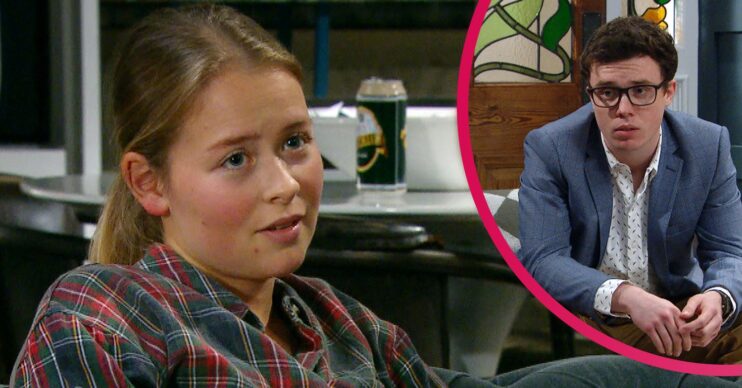 Isobel and Bradley's characters are together

Emmerdale star Isobel Steele has broken her silence on the romance rumours about her and her co-star Bradley Johnson.

Speculation began that the two actors were dating as they appeared to go on holiday together.

However Isobel has now confirmed that she and Bradley are not together, but they are good friends.

Speaking to Metro.co.uk she said: “Brad is wonderful and such a good friend of mine. We are very similar and work really well together when we have scenes just us two.

“I can see why people jumped to conclusions, seeing two characters spending time together on and off-screen.

“For the record me and Brad are not in a relationship. We are just very good friends who enjoy each other’s company out of work as well as in work.”

Liv and Vinny began dating last year, however Liv discovered that Vinny was being physically abused by his dad Paul, who had a gambling addiction.

When Liv confronted Paul, he began attacking her, but just moments later he was killed when Jimmy crashed his truck into the barn.

Liv tried to help Paul escape but when she couldn’t free him, she had to leave him behind. Seconds later the barn exploded.

Ever since Paul’s death, Liv has struggled with her guilt and began drinking again.

Liv and Vinny split up as she struggled with her addiction. Recently she ended up in hospital after nearly choking on her sick whilst drunk.

After realising she could have died, Liv decided to get help for her drinking.

Later Vinny paid her a visit and the two decided to give their relationship another go.

However, what does the future hold for them? Liv has fallen off the wagon once again and this past week even suspected – wrongly – that Noah had raped her when she was totally out of it.

Will the horror of what could have happened to her in such a state and what she accused a so-called friend of finally make her get the help she needs?