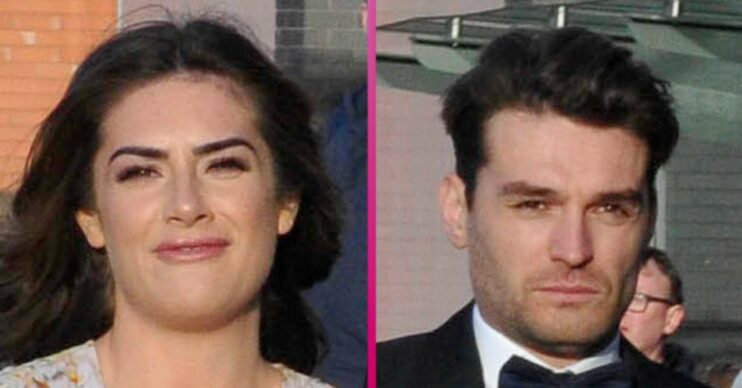 Isabel Hodgins has sparked speculation she has a new boyfriend in the shape of Emmerdale co-star Lawrence J Robb with her latest Instagram picture.

The Victoria Sugden actress and Mackenzie Boyd actor cosied up on the red carpet at the Grand Ball in Manchester earlier this week.

Isabel shared an image of the pair together and made a joke about Lawrence’s outfit.

Fans eagerly commented on the post questioning if they were a couple.

Read more: Who is in the Emmerdale cast for 2022? Meet them all here!

Does Isabel Hodgins have a boyfriend?

Sharing a picture of them close on the red carpet at the event, Isabel wrote: “Sad he didn’t wear a kilt but points for the tartan trousers.”

He bantered back: “The caption is almost as average as the trousers [sic].”

As well as complimentary comments on their look, many fans quickly questioned whether they are dating in real life.

“Are you together?” asked one.

“I was wondering that too,” another added.

A third wrote: “Are you two an item?”

Isabel has not commented on the picture to confirm or deny the speculation.

Isabel has dated a co-star before

If they are an item, it wouldn’t be the first time Isabel Hodgins’ boyfriend was a co-star.

She confirmed she was in a relationship with Michael Parr aka Ross Barton in 2016.

They were together for four years, but rumours that Isabel had cheated with Danny Miller hit their romance early on.

Danny was dating Hollyoaks star Kirsty-Leigh Porter at the time, who exposed their fling.

A source told The Sun: “Isabel and Danny thought they could keep their romance secret but when Kirsty-Leigh saw the texts on his phone, the game was up. She was furious.

“Michael was also angry. He thought he and Danny were close friends.”

Michael and Isabel stayed together and did not comment on the rumours at the time.

In 2019 Michael left the soap to try to crack America, and the couple called it quits.

A source told The Sun newspaper at the time: “They drifted apart and felt it was better to be mates.

“He has been throwing himself into his social life and has just been on a lads’ hol and she is focusing on work.

“They’re both young and want to follow their dreams. They had a meaningful relationship and they’ll remember the good times.”

Isabel and Lawrence‘s on-screen characters don’t have a lot to do with each other.

Victoria has been off screen for a while following an alleged incident on set in which she and Matthew Wolfenden were reported to have mimicked a mixed-race co-star’s accent, but she appears every now and then.

She is currently in a relationship with David Metcalfe having survived his ex-girlfriend, Meena Jutla‘s attempts to kill her.

Meanwhile, Mack has been quite the heartbreaker since he arrived in the Dales.

He seduced Charity Dingle and therefore broke up her relationship with Vanessa Woodfield.

Then when Vanessa returned he dumped Charity, realising she would never get over her ex-girlfriend.

Charity begged him to take her back, but Mack refused and has made it very clear they are never getting back together.