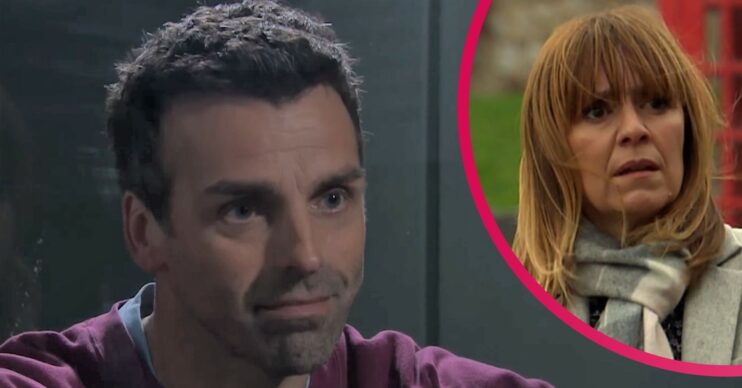 It's a pretty boring ending if he is!

Emmerdale dropped the bombshell that Pierce Harris is dead tonight, but is he actually gone for good?

Every time his ex-wife, and rape victim, Rhona Goskirk gets her life back on track, Pierce rears his head to bring more torment.

This week saw him write to her from prison and inform her he’s dying.

Read more: 15 Emmerdale spoilers for next week including a death?

How did Rhona find out Pierce had died?

After Pierce’s dying wish she help him find his long-lost son, Rhona agreed to help him.

She had confirmed with the prison he was definitely dying and decided, against Vanessa’s advice, to track down Marcus.

With a little help from Ryan, Rhona was successful and made contact.

Vanessa tried to interfere and stop the meeting, but Marcus turned up in the village and Rhona was able to tell him about his dad.

Marcus then asked Rhona to go and see Pierce with him.

Rhona was deliberating whether she could face it tonight (Friday, February 4) when Marcus arrived. He told Rhona Pierce had taken a turn for the worst and so they wouldn’t be able to visit him.

As they were talking Marcus got a call. He told Rhona it was the prison service as he recognised the number.

A short phone call later he turned to Rhona and said: “He’s dead.”

Is Pierce really dead in Emmerdale?

Although Emmerdale has not confirmed whether Pierce has actually really and truly gone, it seems a very strange ending for such an integral character.

An off-screen death with a mere mention is usually reserved for lesser players or those who have died in real life.

But Pierce was part of such an iconic storyline when he raped Rhona, and then returned four years later and killed her boyfriend, that it seems a bit of damp squib.

After her years of torment at his hands, is Rhona really free of him at last?

Aren’t we missing that one final showdown between the pair before the life drains out of him?

Could news of his death be one big trick?

Read more: Emmerdale spoilers: Chas to be killed off in 50th anniversary episodes?

Who is Marcus in Emmerdale?

It’s possible Pierce’s death was a gateway to introduce his son, Marcus Dean, into the show.

The broodingly handsome electrician so far seems a far cry from his father. Mild-mannered and kind rather than controlling and violent.

But some fans aren’t convinced at all.

They think Pierce and Marcus could be working together to get Rhona to visit Pierce again as part of a revenge plan.

“That Marcus is such a set up… So obvious Pierce has set her up so she will visit him,” wrote one on Twitter.

Another agreed: “Has Pierce put his son up to this to get revenge on Rhona?”

Could part of their revenge plot be to pretend Pierce is dead?

This is Emmerdale and stranger things really have happened…