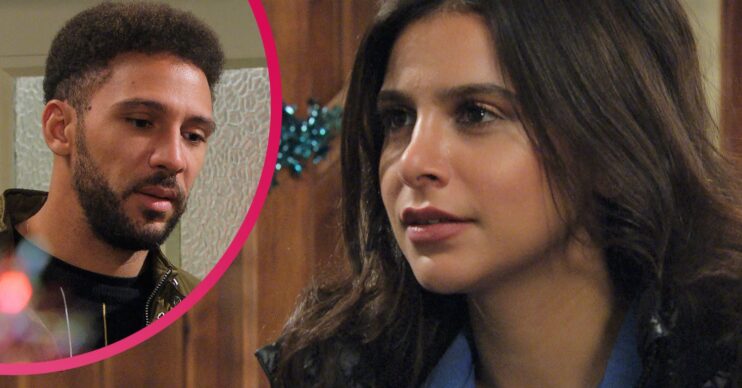 Emmerdale character Meena Jutla told Billy Fletcher she’s pregnant with his child, but is she telling the truth?

This week, Billy stopped Dawn’s son Lucas from being taken by his biological father, Alex.

Afterwards Dawn and Billy shared an emotional moment and shared a kiss, sharing their love for each other.

Billy realised he needed to end things with Meena.

In tonight’s episode (Wednesday, December 22) Billy woke up at Dawn’s having slept on the sofa to ensure Alex didn’t come back and try to take Lucas again.

When Meena found out, she was enraged but Billy told her their relationship is over.

Meena was even more upset when he said he still had feelings for Dawn.

However Meena had news for Billy – she’s pregnant with his child.

Later Meena went to her work Christmas do at the Woolpack and set her sights on Liam.

She told Manpreet that Billy split up with her, but soon cheered up and starting drinking with Liam.

Later a drunk Liam left the pub and the episode ended with him in Meena’s bed.

But is Meena really pregnant?

It has been revealed that Meena is not actually pregnant.

Speaking about the pregnancy to Entertainment Daily and other media in a recent interview, actress Paige Sandhu said: “She freaks out as she would. To her, she still believes that they’re still meant to be together and they’re soulmates.

“So what she does is she pretends to be pregnant. In her eyes that means that she still has a way of taking ownership of him and making sure that he can’t cut her out of his life, and there’s still a way for her to weasel her way back in.”

What’s next for Meena?

This week, Billy tells Dawn that Meena is pregnant and she reassures him that it won’t affect their relationship.

However when Manpreet finds out, she’s suspicious of her sister’s pregnancy.

She soon stumbles across a social media page for Carol, the sister of Meena’s first victim Nadine.

Later Manpreet meets up with her and is shocked when Carol says she believe Meena killed Nadine.

Meena later meets an unknown package on Main Street and exchanges cash for a dodgy package.

On Christmas Manpreet demands answers and asks to see proof of her pregnancy.

Believing her sister has crossed a line, Meena darkens as Manpreet starts to realise Carol may have been right all along.

Will you be watching Emmerdale this Christ,as? Leave us a comment on our Facebook page @EntertainmentDailyFix and let us know what you think!