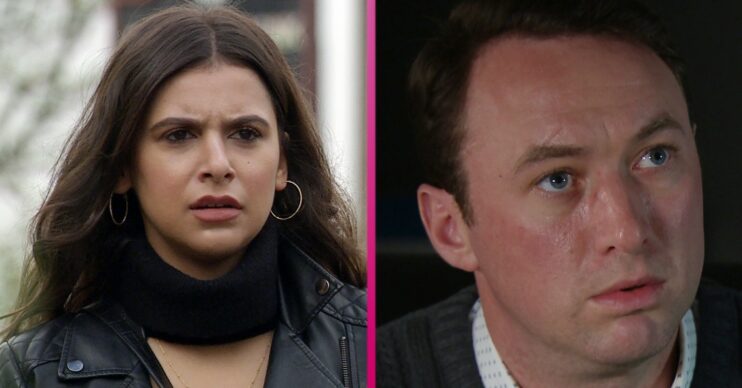 Emmerdale: Is Meena dead? Paige Sandhu hints this isn’t the end of the storyline

Meena is back for revenge

Emmerdale serial killer Meena Jutla was pushed off a bridge by Liam Cavanagh tonight (Wednesday, February 16) but is she dead?

Dawn made her way back to the village to find Lucas, meanwhile Billy tried to help Leyla, who had been shot by Meena.

Meanwhile Liam and Manpreet found out Meena is back.

Dawn managed to get back to the village and found her son, while getting help for Harriet.

Liam soon saw Meena running around the village and went after her with a pitchfork.

Liam confronted Meena demanding to know where Leyla is and she told him she shot him.

He ordered her to take him to Leyla, but she ran off. He chased her through the graveyard and to the humpback bridge where Meena killed Liam’s daughter, Leanna, last year.

Meena started to wind Liam up by telling him the details of how she murdered Leanna.

As Liam went to hit Meena, she told him Leyla was at the viaduct and if he went now he could save her.

Liam threw the pitchfork in the river, but Meena then continued to upset him saying: “God Leanna was fun to kill though.”

Seeing red, Liam pushed Meena off the bridge and she landed in the exact spot Leanna died.

As Liam looked over, a passer-by also came to check on Meena, but is she dead?

It has not yet been revealed if Meena will survive being pushed off the bridge. However actress Paige Sandhu has hinted there is more to come.

Read more: Who is Emmerdale’s Katherine Down Blyton married to? Is she related to Joanne Froggatt?

Speaking on This Morning today to Dermot O’Leary and Alison Hammond Paige dropped a massive hint that Meena’s story is set to continue.

“There are two people’s lives that hang in the balance this week,” Paige revealed.

“And I can say that this is the beginning of the end for Meena, but there’s more drama to come.”