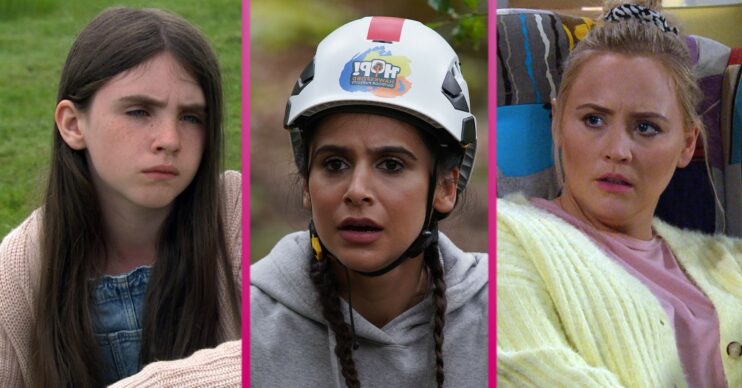 There's been a lot of drama in the village this year!

Emmerdale in 2021 has been full of drama, murders, romance and betrayal!

Here’s our round-up of the stories we loved, and some we could have done without.

Meena‘s murders have been THE Emmerdale story of 2021. Starting when she pushed poor Leanna from the bridge on her 18th birthday, Meena’s campaign of killing has stepped up a gear recently.

After killing Leanna and taking her ring as a souvenir, Meena attacked Andrea in the maize maze during survivor week, and pinched the bracelet made for her by daughter Millie. Of course that was after she tried to drown Victoria Sugden, but failed because she was interrupted.

And then, in her most brutal killing to date, Meena battered Ben with an oar. Ben had found the footage that showed Meena holding poor Vic under the water.

He managed to get away from the murderer, when she slipped on some wine spilled by Liv Flaherty. But the kind-hearted fool went back to check on her and paid for his concern with his life!

Now it’s only a matter of time before Meena kills again but who will her next victim be, and will her love of taking souvenirs from her victims be her undoing?

Paul and Vinny, and the wedding day lorry crash

As Paul Ashdale and Mandy Dingle planned their wedding during Emmerdale in 2021, viewers were desperate for Vinny to speak out about his dad’s abuse. Especially when Paul doled out yet another vicious beating on his son.

In the end, though, it was brave Liv who confronted violent bully Paul.

She cornered him in the barn where the wedding was being set up and told him exactly what she thought of the gambling addict’s evil ways.

Paul, though, wasn’t even a tiny bit sorry. He attacked Liv and said some awful things.

Then Jimmy King crashed his truck right into the barn and things got really messy!

Paul was trapped under a fallen beam, and though Liv tried to free him, she couldn’t. When she said she was going for help, Paul became abusive again, calling her a freak.

Liv walked away, out of the barn, just as a gas cylinder ignited and the whole barn exploded. Good riddance to Paul, but poor Liv’s not been the same since.

When Tracy Metcalfe gave birth to baby Frankie in Emmerdale in 2021, she was delighted and so was the tot’s dad, Nate Robinson.

But it wasn’t long before Tracy was worrying about her little girl. She was constantly at the doctors’ surgery, fretting over tiny ailments and generally finding it all too hard.

Eventually, knowing she wasn’t coping, Tracy took herself off leaving Frankie with Nate.

Still grieving for her dad, Frank, she went to find the tree he’d once taken her to. And that’s where Faith Dingle found her, the next day, realising she was in a bad way.

Tracy was diagnosed with post-natal depression and got help.

Though now Nate’s been revealed as a cheater, we’re not sure this family will stay happy for long.

After Leanna’s tragic death, young April Windsor decided to do something to help her grieving friends.

She set up a web page for those who’d lost a parent.

But April became the target of vicious online trolls. She became withdrawn and sad, suffering badly at the hands of her abusers.

And things took a turn for the worse, when she discovered the worst of the trolls was her own aunt, Cathy Hope.

Liam Cavanagh was a mess after his daughter Leanna died. He was pushing away everyone who tried to help, and generally falling apart.

One person, though, was by his side throughout – his new wife, Leyla. She stood firm, even when she found out she was pregnant and then suffered a miscarriage.

And again when she discovered that Liam’s ‘new job’ at the hospital was a lie and he was actually tending someone else’s garden in the house where he’d lived with Leanna and his first wife.

Leyla’s loyalty has paid off now, with Liam emerging from his grief and their marriage back on track. We hope 2022 brings some happiness for the newlyweds!

While Meena was getting rid of Andrea during survival week, Priya was trying to get out of the burning maize maze.

But she was burned when some fiery debris fell on her and she’s still suffering the consequences.

Priya’s struggle as she comes to terms with her scars, and the reemergence of her eating disorder, has been hard to watch. We reckon things won’t be getting easier for her any time soon.

Among the highs, though, there have been a few lows. Here’s what we thought were the worst stories of the year.

Harriet hiding in the cellar

Unable to cope with the guilt of killing DI Malone, Harriet Finch, for reasons that never really became clear, decided to lock herself in the cellar.

Dawn eventually coaxed her out. And she’s fine now. It’s all forgotten.

Jimmy falling in love with Mandy

This time last year, Jimmy and Nicola King were happily married, bringing up their blended family.

Then little Carl’s mum Juliette turned up, tried to claim the lad back, Jimmy crashed his truck and blamed himself for Paul’s death, he and Nicola split up and he fell in love with Mandy.

Then, though, Juliette went off to America, Jimmy and Nicola got back together, and everything went back to normal. What was the point?!

And another story that had us scratching our heads was the introduction of Wendy’s ex-husband Russ, and him shooting David in a dramatic siege at the HOP.

David recovered in a matter of minutes, Wendy’s huge secret that she wasn’t a nurse was ignored, and Russ has gone for good.

We’ve got no idea what’s going on there.

We’ve got so many questions but we’re not sure we care any more!

Leave us a comment on our Facebook page @EntertainmentDailyFix and let us know what you think of Emmerdale in 2021!