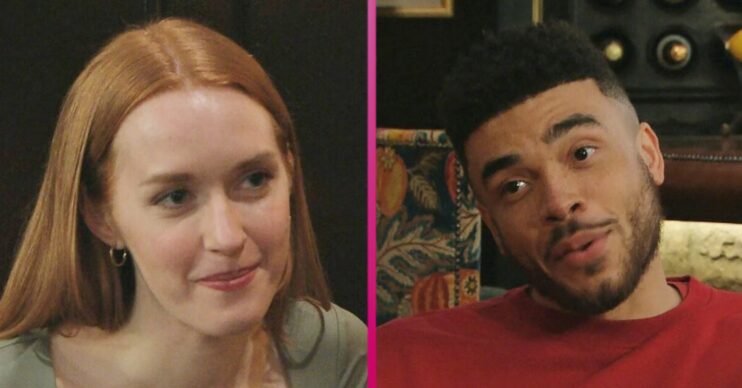 Emmerdale: How old is Chloe? What’s the age difference with Nate?

He seems concerned about the age gap, but she's not bothered!

Chloe in Emmerdale is trying everything within her feminine power to lure in Nate, but how old is she?

Is she really the right age for him?

Nate doesn’t seem to think so and has told her as much, but Chloe is determined to win him around.

Will these two become the next Emmerdale couple? And if so, is the age difference going to cause trouble?

Who is Chloe Harris?

Chloe Harris arrived in Emmerdale in August 2021 and is the sister of Sarah Sugden‘s heart donor.

She quickly caught the eye of a smitten Noah Dingle who has pursued her relentlessly since her arrival.

Their romance was controversial because Chloe has a dangerous dad, who is in prison. Kerry Wyatt, who was looking after her at the time, tried to keep them apart.

But Chloe ended up visiting her dad and demanding her freedom, which came at a price: he disowned her.

She now lives with Kerry and Amy in the village and is not shy when it comes to the fellas!

After a brief romance with Noah she slept with Jacob Gallagher. Noah was heartbroken and turned very nasty.

He has since tried to win Chloe back, but she’s not interested. She has turned her attentions to Nate.

Missing daughter Frankie and ex Tracy, Nate was getting very drunk in the pub. Flirty Chloe decided to join him and it wasn’t long before they headed home together.

The next morning, Nate couldn’t get Chloe out of the door quick enough, but she was determined to get her feet under the table. Sipping coffee and acting like they were in a relationship, it’s clear she’s smitten.

But Nate insisted no one could find out, citing the fact he was much older than her and people would gossip.

But just how much older is he?

How old is Chloe in Emmerdale?

Chloe’s age has never been specifically stated, but given she was living with her dad, but doesn’t appear to attend school, it would put her around about 18.

She was also in a relationship with Noah, who has just turned 18, so it would seem she’s a similar age.

Kerry is looking after Chloe, but she comes and goes as she pleases and is allowed to stay out all night, which suggests she is technically an adult.

However, Nate is much older.

What’s the age difference between Chloe and Nate in Emmerdale?

Nate was born on April 27 1991 to mum Cara Robinson. Dad Cain Dingle didn’t know anything about his son until Nate arrived in the village in 2020 and seduced Moira.

Some would say that’s quite the age difference!

Read more: Are they really having sex on Netflix film 365 Days?

Do Nate and Chloe get together?

She turns up at the farm and starts flirting with him, but it’s clear he’s uncomfortable.

When she then asks Moira about shifts at the farm, it seems she really does have a crush.

Nate is forced to let her down in no uncertain terms and she is devastated.

Noah seizes his chance to charm her again, but will it work?

Will Chloe choose Noah? Or continue to pursue Nate?