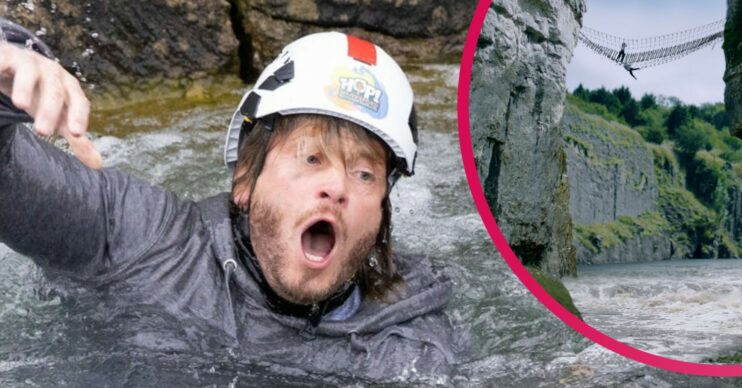 Emmerdale: How big is Home Farm? Where is the waterfall?

Some fans watching the explosive stunt scenes were questioning just where has Kim Tate been hiding her waterfall?

Emmerdale has thrilled fans with a huge stunt week as several villagers including Victoria Sugden fight for their lives.

But as the participants of the survival challenge climb across a rope bridge, abseil and battle rapids, viewers have been left questioning one thing: exactly where has Kim Tate been hiding all this land?

How big is Home Farm in Emmerdale?

Home Farm is the house in which Kim Tate lives. It has 11 bedrooms, numerous downstairs rooms and even a granny flat.

Home Farm Estate is the business that comes hand-in-hand with the house. The Estate has lots of land and also owns several houses in the village.

But there has never been mention of rapids or a waterfall being part of the land. Nor those stunning cliffs that the rope bridge is hanging between!

While the residents of Emmerdale, including David Metcalfe, take part in the survival challenge, last night saw Victoria cascade down a waterfall.

While we wait to see if she’ll survive the plunge, viewers all want to know exactly where the waterfall is.

How much land does Kim Tate actually own? She’s even got her own waterfall! #Emmerdale

Laughable. Think the writers forgot where the Tate estate is, and that it has never had even a hint of a waterfall and rapids in 49 years. Just a ludicrous scenario to suddenly come up with. #emmerdale https://t.co/xqOCwdoF8S

Since when did home farm have a lake? Never knew home farm to actually be that big especially having a big waterfall there. #Emmerdale

Also where did this waterfall come from? I’ve watched this soap 25 years and never remember Frank Tate hiking down the rapids #emmerdale

What happens on Emmerdale tonight?

Read more: Emmerdale: Fans terrified Victoria is about to die

After Victoria fell over the waterfall, Meena holds her lifeless body under the water.

But someone spots her latest attack and Meena is forced to follow them into the maze to silence them too.

Ready to kill yet again, who does Meena have in her sights now? Who will die at her hands?

Elsewhere, Charles is badly injured – will he make it out alive?