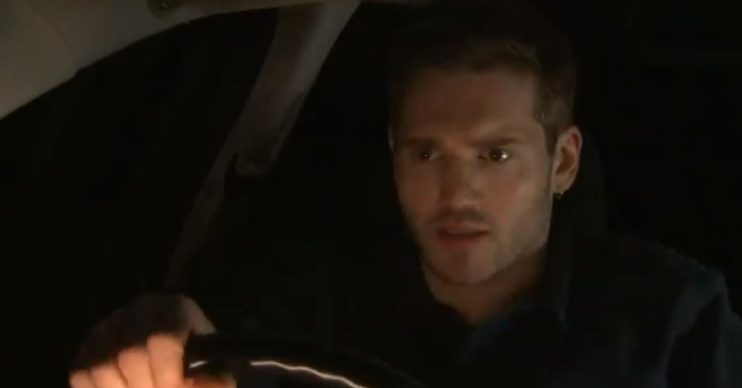 Death is coming - but is Jamie's responsible?

ITV’s Emmerdale has hinted that Jamie Tate is responsible for running someone over.

A new trailer for the soap’s return to normal episodes next week sees Jamie driving a car and appearing to hit someone.

TRAILER: Good things come in threes…but maybe not for everyone in the Village. #Emmerdale's back to 3x a week – Monday, Wednesday and Friday from 29th June. pic.twitter.com/AfpPRsfZNA

Jamie looks horrified by what’s happened – but has he ended someone’s life?

Soap boss John Whiston recently hinted at the news of a killing coming to Emmerdale.

Speaking on a Sky News interview, he said: “In terms of all the normal stuff that goes on in soaps, people kind of kissing each other or murdering each other, we’ll have to socially distance murders, I think.

The trailer also sees the return of Jamie’s wife Andrea – though she won’t be sticking around.

She can be seen sobbing in her hotel hideaway looking at pictures of her now broken family.

Before lockdown episodes, Andrea exposed Jamie and Belle’s affair and fled the village. Now, viewers will finally get to see what happens next.

Andrea is hiding out at a hotel but when a police officer arrives, she assures them she is safe and well.

At Home Farm, Jamie is in despair when the police refuse to tell him where Andrea is.

Meanwhile in the village, Jamie and Belle declare their love for one another.

However as Andrea returns she sees them together, but they don’t see her.

With her worst fears confirmed, she tells Leyla she can’t stay and leaves again.

Later, Jamie is stunned to find Millie in the kitchen alone. But Andrea is nowhere to be seen. Where has she gone?

Is Andrea the victim of Jamie’s hit and run?

One person who definitely going to die any time soon is Jamie’s mum Kim. Actress Claire King has reportedly signed a new contract to stay on the show for another year.

A source told The Sun: “Claire’s comeback has been a huge success so it’s a no brainer to keep her around.

“She’s loving playing Kim and there’s exciting stuff coming up for her.”