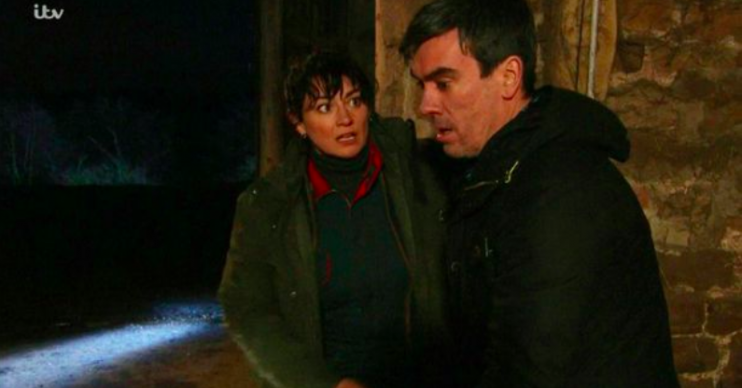 Emmerdale hints at Cain and Moira reunion to destroy Malone

Could the former couple reunite to take on Malone?

Emmerdale has hinted Cain Dingle could reunite with ex-wife Moira Barton – as she fights to save him from evil DI Malone.

Corrupt cop Malone arrived in the village earlier this year and set about strong-arming Will Taylor into working for him once more.

But when Cain stepped in to help his ex Harriet – Will’s partner – in getting rid of the gun Will had bought to protect himself from Malone, he found himself in the inspector’s sights.

He has been blackmailed into running drugs for Malone.

And when he tried to refuse Malone had one of Moira’s bull’s beheaded in a horrifying threat.

Cain’s one chance at stopping Malone, by secretly keeping evidence of his corruption with Billy Fletcher, went up in smoke when Will turned it in to Malone.

So now with no choice except to comply, Cain is forced to help Malone with one more dodgy job.

However Cain hasn’t reckoned on his ex wife realising something serious is happening to him.

And she’s determined to help.

Earlier this week viewers watched as Moira quizzed Cain about what was wrong – but he refused to open up to her.

Not one to give up, Moira visited Harriet for advice and discovered that there was something dodgy going on between Cain and Will.

In last night’s episode Moira tried again with Cain but when he knocked her back.

She told him bluntly that as long as they share children, she’ll be involved.

And she vowed to protect him.

It has been the clearest hint yet that Emmerdale intends to reunite the former couple.

Although she has come to accept the divorce, Moira has made it very clear she would take Cain back.

But with her cheating on him with his own son Nate, Cain has so far refused to forgive her.

Though if Moira is the one to get rid of Malone – love could be in the air again.

Do you think Cain and Moira should reunite? Leave us a comment on our Facebook page @EntertainmentDailyFix and let us know what you think!