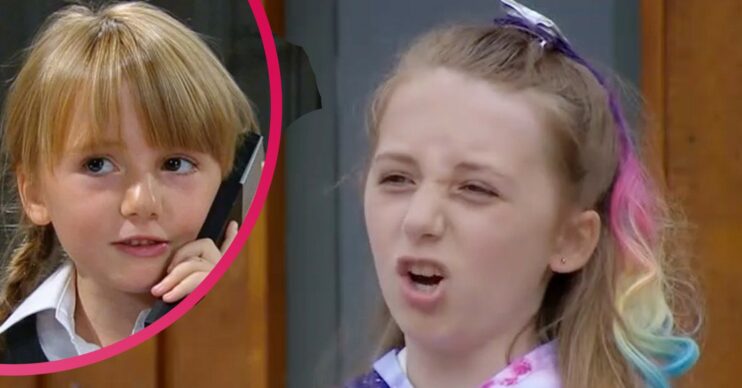 Has Angelica King been recast in Emmerdale? Who plays her?

She's looking all grown up

Angelica King is looking very grown up in Emmerdale as she returns to screens, but has she been recast?

The tween is back in episodes after her mum, Nicola King, was attacked by a group of girls on the ITV soap.

It’s the first time we’ve seen Angelica since August 2021 and she’s certainly changed since then!

So, has Angelica King been recast in Emmerdale?

Who is Angelica King in Emmerdale?

Angelica – also known as Angel – is the daughter of Jimmy and Nicola King.

She was born on August 6, 2009, but was premature and taken to the special baby unit due to breathing difficulties.

As if that wasn’t a tough enough start in life, just 24 hours later she was kidnapped by her Uncle Carl’s wife, Lexi.

Lexi and Angel were found on the hospital roof and brought to safety.

Angelica’s life took another dark turn just days before her christening when crazed Sally Spode pushed her into the middle of the road. Fortunately she was okay.

But Cathy’s mum, Viv, wasn’t happy about that and she took Nicola to court. Nico got off with a caution and, as her case was the same day as her wedding to Jimmy, she raced off and just made it in time.

Angelica is Nicola and Jimmy’s only child together.

Jimmy has two sons – Elliot Windsor and Carla Holliday who are Angel’s half-brothers.

Read more: Does Nicola know one of her attackers in Emmerdale? Fans have a shocking theory!

Has Angelica King been recast in Emmerdale?

The role has not been recast, it just seems to be another case of kids growing up!

Much like fellow child actors Sebastian Dowling who plays Heath and Alfie Clark who plays Arthur Thomas, Rebecca Bakes has just got older.

We have not seen her on screen for almost a year and so her change in appearance is a natural part of growing up.

Rebecca has played Angelica since 2009 after taking over the role from Sophie Firth.

Sophie played Angelica from birth for three months before Rebecca was cast in the role instead.

Sophie tragically died in 2012 after a shock accident. Her dress caught alight and she suffered 70 percent burns to her body.

After a nine day fight for life in intensive care, she heartbreakingly died of her injuries aged just three.