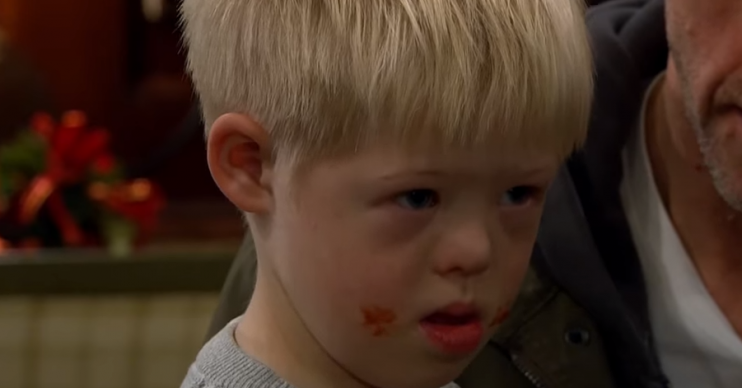 Harvey Rogerson, who plays Leo Goskirk in Emmerdale, has posed for a sweet pic with his puppy Lulu.

Alongside the picture the tweet said: “Just love this face #ourlovelyharvey #happyboy #bestfriends.”

Last month, Harvey looked overjoyed as he received a puppy for his ninth birthday.

In a tweet posted a few days before the young actor’s birthday, it said: “It’s love at first sight… today Harvey’s wish came true, he’s been asking for a chocolate colour dog for a long time and today Lulu arrived.

Harvey isn’t the only Emmerdale star who recently welcomed a puppy into their family.

Whilst in real life they’ve all been celebrating their new arrivals, unfortunately in Soapland, their alter egos haven’t been having the best time.

Both Leo and April have recently had to deal with their father Marlon going to prison for a murder he didn’t commit.

After Pierce Harris killed Graham Foster, who was Leo’s mum’s boyfriend, Marlon was framed and charged for the crime.

Although Pierce has since been arrested and Marlon was released, he has struggled with his return home.

After discovering his daughter April was being bullied, he also found out his cousin Charity and her son Ryan had taken money from Graham the night he was killed and didn’t come clean to the police.

Knowing his family withheld information that could’ve led to his release left him furious and when he found out Kim Tate may have hired someone to kill Graham he ended up disowning his family, unable to trust anyone.

Will he ever forgive his family members?