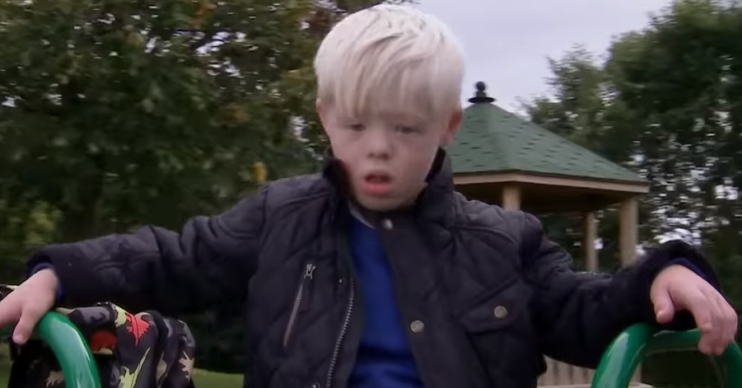 Harvey is in self-isolation after receiving medical advice

Emmerdale actor Harvey Rogerson is being homeschooled whilst he’s in self-isolation.

The nine-year-old, who plays Leo Goskirk in Emmerdale, is currently isolating during the coronavirus pandemic and his mum revealed that she’s homeschooling him to try and keep a learning routine.

Alongside the picture, the tweet read: “Hi everyone, hope you’re all ok and staying safe. Mum is trying to keep some sort of learning routine, we can’t recommend @specialiapps enough. They are amazing resources for children with extra needs.

“H loves them he stays engaged and loves the clap he gets at the end when he gets it right.”

Hi every1 hope you’re all ok & stayin safe Mum is tryin 2keep2some sort of learning routine🙄 we can’t recommend @specialiapps enough they r amazin resources 4children with extra needs H 💙them he stays engaged & 💙 the clap he gets at the end when he gets it right 😊😍 pic.twitter.com/oCT7bLc7z2

Earlier this week, it was revealed Harvey, who has Down’s syndrome, is in self-isolation.

In a tweet on his Twitter page, it read: “After medical advice, we’ve taken the decision today to protect our little H and to self-isolate.

Mum is trying to keep some sort of learning routine.

“We are all well with no symptoms but H is more vulnerable due to his suppressed immunity. Stocked up sensibly and am going to try to make the most of the quality time together… stay safe everyone.”

Read More: Linda Lusardi reveals she has ‘never been so ill’ as she continues to battle coronavirus

After it was revealed on Wednesday (March 19) that schools in the UK would be shutting for the foreseeable future from today (Friday, March 20), some soap stars revealed they would be homeschooling their kids.

Soap actress Samia Longchambon, who plays Maria Connor in Coronation Street, also made the decision to homeschool her children 10-year-old Freya and four-year-old Yves after Freya came down with a cough.

At the time of writing, in the UK there are 3269 cases of coronavirus and 145 deaths.