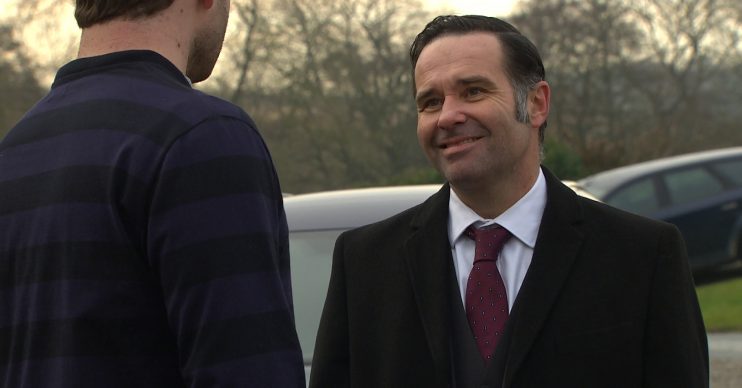 Emmerdale fans confused by how much money Graham left Rhona

Graham left his money to Rhona instead of Kim

Emmerdale fans have been left confused by how much money Graham Foster left to his girlfriend Rhona Goskirk.

Back in January, Graham was murdered the night he was due to leave for France with Rhona and her son Leo.

As Graham’s death was part of a whodunit storyline, there were multiple suspects, including his wife Kim Tate.

Kim had hired Al to kill Graham, but Rhona’s rapist ex-husband Pierce got there first and murdered him.

In Monday’s episode of Emmerdale (March, 30) Rhona learnt that Graham had left her a large sum of money in his will.

In Wednesday night’s episode (April 1) Kim found out Graham had changed his will not long before his death and as a result, so she got nothing.

After finding out the money was going to Rhona, Kim had a go at her, accusing her of forcing Graham to change his will and blaming her for his death.

When Rhona overheard Moira’s plan to to sell the farm to Kim at a low price, she made an offer.

Wanting to honour Graham’s memory, Rhona made the decision to invest the money in Moira’s farm.

However, she didn’t even negotiate a price with Moira, leaving viewers wondering just how much money Graham had left Rhona.

Anything concerning Graham and his money is more confusing than a Coronavirus update by the government. Why is that? #Emmerdale

@Charlotte_K13 did they say how much Graham left? #emmerdale

#Emmerdale Bloody hell how much money did Graham leave Rhona??

Rhona buying into the farm How much exactly did Graham have?? #Emmerdale

Crikey, how much money did Graham leave Rhona…#Emmerdale

Rhona's going into business with Moira on the farm now with the money she inherited from Graham really? #Emmerdale

I want to know how much 007 left Graham #Emmerdale

What happens next with Moira, Rhona and Kim?

So we can’t imagine Kim will be thrilled when she finds out Rhona is using Graham’s money to buy into the farm.

Crikey, how much money did Graham leave Rhona?

But will she try to get revenge on Rhona for ruining her plans?

We know Kim isn’t scared to have someone killed. Could she be plotting Rhona’s demise next?

The next episode of Emmerdale is tomorrow (Friday, April 3) evening at 7pm.