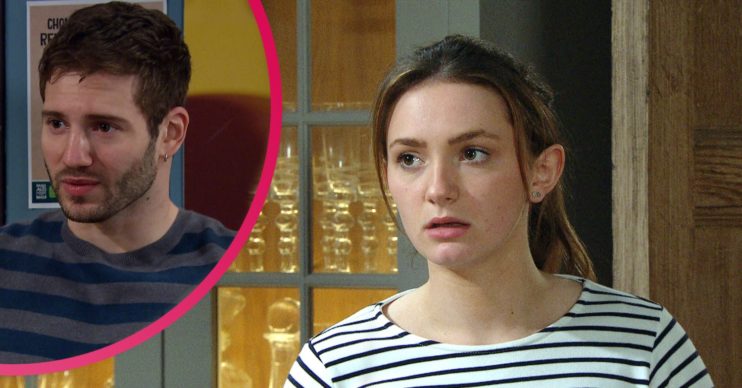 Gabby is pregnant with Jamie's child

Emmerdale viewers have all been saying the same thing about Gabby Thomas’s baby bump.

In Thursday night’s episode of the ITV soap (June 3) pregnant Gabby could be seen in the Home Farm living room pretending to have a martini.

Soon Noah walked in and she assured him it’s just water.

Noah stopped to ask Gabby what she was up to, but Gabby refused to tell him as Noah recently told Jamie about her stealing from the HOP business account.

Read more: Emmerdale SPOILERS: Meena to kill Jacob as he gets in the way of her and David?

Gabby began to take the mick out of Noah saying he knew nothing about the business.

But Noah told her that Jamie told him everything. When Gabby pressed Noah for information, he refused to tell anything and called him pathetic before walking out.

However viewers were distracted by the fact Gabby has no baby bump.

If Gabby is pregnant, where is her bump? #Emmerdale

Where's Gabby's bump? I thought she would be huge by now #Emmerdale

Should Gabby not have a bump by now?! #emmerdale

Emmerdale: How many months pregnant is Gabby?

Jamie Tate is the father of Gabby’s child. The two had a one night stand at the end of January 2021.

Gabby discovered she was pregnant at the beginning of February, meaning she should be around four months pregnant.

After discovering she was pregnant, Gabby told Jamie about the baby, but he wanted her to get an abortion.

Gabby told Jamie’s mum Kim about her pregnancy and she offered for her to move into Home Farm.

Jamie has since agreed to be there for the baby. However Gabby was upset when she discovered he’s dating Dawn Taylor.

Will you be watching next week’’ Emmerdale? Leave us a comment on our Facebook page @EntertainmentDailyFix and let us know.