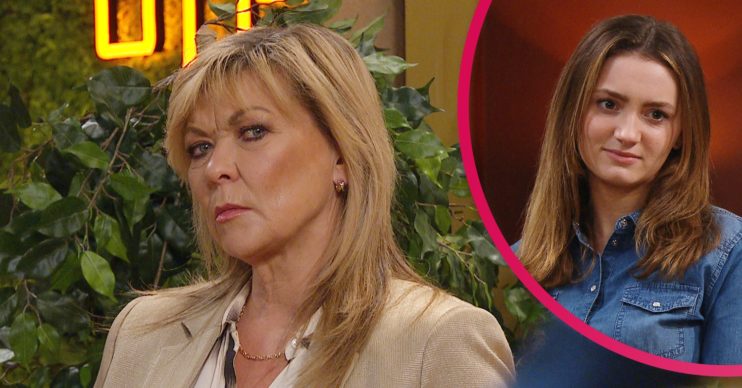 Gabby is living at Home Farm with Kim and Jamie

A few months ago Kim invited Gabby to move into Home Farm as she discovered the teenager is pregnant with Jamie Tate’s child.

Over the last few weeks Kim has been feeling unwell and it was revealed to viewers that her drinks are being spiked by an unknown person.

Whilst have fans have been suspecting Gabby could be behind it, they’re now convinced after spotting a clue in last night’s episode.

In Monday’s episode (April 26) Gabby and Jamie attended the scan for their unborn child.

In last night’s episode, Gabby gave Kim a copy of the scan photo.

As Kim looked at the picture of her unborn grandchild she said: “Oh my baby.”

However Gabby gave Kim a worried look, leaving fans convinced she is the one poisoning Kim.

OOPS Kim! that was akward saying that in front of Gabby! and Yes i think it's Gabby poisoning Kim! #Emmerdale pic.twitter.com/2nYE72RQ2J

I think it's Gabby that is poisoning Kim #Emmerdale

Who is poisoning Kim? The theories

As well as Gabby, fans have come up with other theories as to who could be poisoning Kim.

Some fans have predicted that Joe Tate is the one poisoning Kim.

Joe was last seen in 2018 and was forced to flee the village as Kim wanted him dead. But some fans think he could secretly be back in the village getting his revenge on Kim.

Others have predicted that Kim’s second husband Steve Marchant, who went to prison in 1999, could be back for his revenge on Kim.

What’s next for Kim?

Read more: What happened to Steve Marchant in Emmerdale? Fans predict he will return!

Later this week Kim finds out Jamie and Dawn are now a couple and she tries to get her son to break things off with her.

She soon gives a heartbroken Gabby a life-lesson on how to look out for number one, leaving Gabby thoughtful.