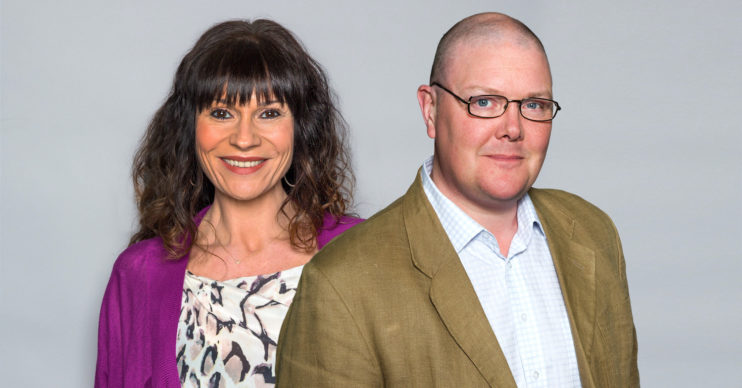 Marlon, Ellis and Al star in the other episode

Emmerdale airs the final two of its lockdown episodes next week.

Chas and Paddy are first up, followed by Marlon, Ellis and Al, who are all stuck together.

Here are the spoilers for next week’s Emmerdale.

Chas is struggling with the pub being shut and feeling cut off from her old life.

She wants to make the most of the time she and Paddy can spend together with Eve, but Paddy has other ideas.

Paddy seemingly wants to drink the cellar dry instead.

However, it soon becomes clear his jovial banter is actually masking the fact he wants to get things back on track between them.

Chas gets emotional when they clap for key workers, and Paddy finds a chance to reflect.

Eager Paddy soon comes up with a plan for them both, but will Chas allow him to get carried away?

Lucy Pargeter, who plays Chas, says: “Chas is very much part of the DNA of the village and she’s floundering slightly without that connection to others.

“I think we get a lot of ourselves from other people (as a lot of us have found out) all of a sudden Chas is alone in the Woolpack without any interaction from the outside world and I think she does feel somewhat futile and without purpose.

“She is looking after a baby, cooking and cleaning, but without her job and that isn’t her, really.”

Dominic Brunt, who plays Paddy says: “There is an unspoken strain and Chas is feeling it more than Paddy.

“Chas has had the bulk of the childcare and is, to some degree, more isolated than he is.

“He’s also not very aware of others’ feelings and he’s clumsy emotionally. He’s still a bit of a puppy and not very worldly so he misses the subtleties of people’s emotions.

“As usual he doesn’t read the signs straight away and should have seen Chas was unhappy months ago. I just hope he’s not too late.”

A plumbing issue at his own home sees Marlon living in another house in the village.

His kids, April and Leo, aren’t with him, with other villagers taking care of them.

Marlon isn’t happy when Ellis invites Al to live with them as he has nowhere else to go.

With tensions rising, things soon boil over for Marlon and the man he believes ruined his latest marriage to Jessie.

To make matters worse, there’s deep strain between Al and Ellis too.

Will Al finally confess why he wasn’t a better father?

And can Marlon and Al make it to the end of full lockdown under the same roof?

Mark Charnock, who plays Marlon, says his alter ego is “Incandescent with rage” when Ellis invites Al to move in.

“He is astounded that Ellis would think this is okay when he knows what Marlon thinks about Al.

“Al is the person who would be at the bottom of Marlon’s list to isolate with.”

Marlon has also messed up with his son, Leo, who is isolating with mum, Rhona.

“He’s really messed up, one Thursday night,  after clapping for carers Marlon gets carried away and goes all the way into the village and he waves at Leo and Leo doesn’t understand why Marlon won’t come into the house.

“Leo kicks off and scratches and bites his mum. She is furious with Marlon and he is devastated he’s made such a huge mistake. It just breaks Marlon’s heart.”