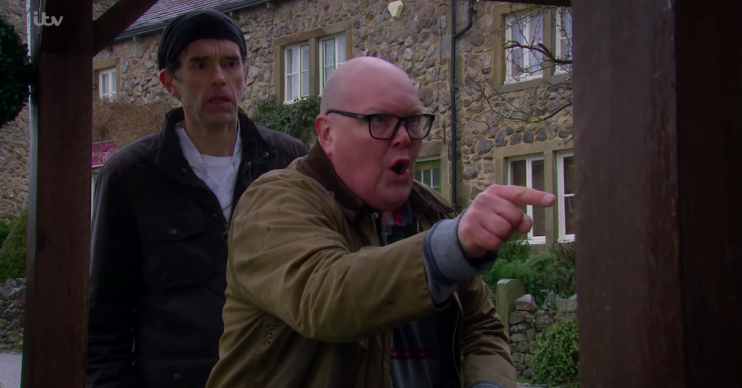 Paddy is out of control

Fans of Emmerdale are fearing for Paddy Kirk’s mental health amid his unhealthy obsession with baby Eve.

The vet has become obsessed with constantly knowing where his baby with partner Chas Dingle is at all times.

He is being over-attentive and panicking about ordinary tings like letting Eve sleep in a room on her own.

And earlier this week he ran himself ragged all over the village, desperately trying to find Chas and Eve because she had left a stuffed animal behind.

But last night, the extent of Paddy’s anguish was laid bare when he exploded at his dad Bear Wolf for leaving Eve alone.

Read more: 9 Emmerdale spoilers for next week including Mandy’s huge lie, a love declaration, and a painful accident

Grandfather Bear had taken baby Eve on a walk around the village before popping to David’s shop.

But when David needed a hand moving some heavy boxes, Bear stepped in to help.

He briefly left Eve happily in her pram for 20 seconds.

However at that exact time, Paddy was panicking over Eve’s whereabouts – and raging to Marlon about how long it takes to feed some ducks.

Spotting Eve’s pram outside the shop, Paddy panicked and ran over screaming that everything will be OK to his bemused baby.

And as Bear came out of the shop after helping David, Paddy let his fury fly.

“You are never going near my daughter ever again,” Paddy screamed to a horrified Bear.

Marlon and Bear tried to calm him down.

But irrational Paddy claimed Eve could have been savaged by a dog or kidnapped by a man on a scooter.

Instead he stormed off and later when they spoke to him again about his behaviour, he brushed it off.

Viewers watching at home have become seriously concerned for Paddy’s behaviour. The incident where he left Eve alone in the car, weeks ago, triggered it.

He was rushing Marlon to the hospital with a heart attack when he forgot Eve was with him.

One fan said: “Paddy needs to talk to a professional.”

Another advised: “Paddy, drink some camomile tea and chill.”

Do you think Paddy is overreacting? Leave us a comment on our Facebook page @EntertainmentDailyFix and let us know what you think!