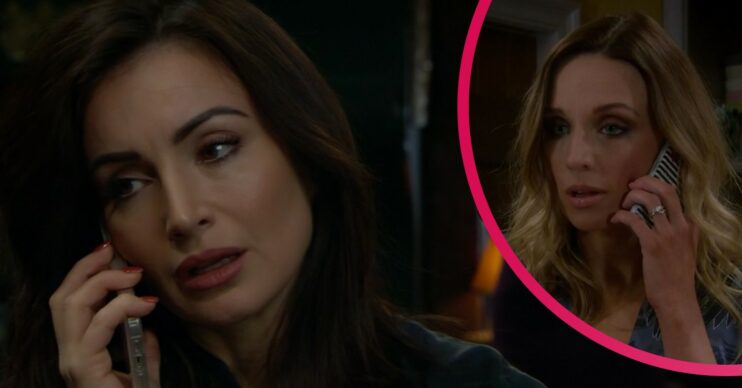 Leyla is hiding a huge secret - but is Andrea still alive?

While talking to her husband Liam and friend Manpreet Sharma about Meena’s upcoming murder trial, Leyla got a phone call that she couldn’t turn down.

She told Liam and Manpreet: “I’m so sorry, I’ve got to take this it’s work again.”

But as she stepped away from prying ears, it soon became clear Leyla is hiding a major secret.

She said: “Hi, I thought I was supposed to be ringing you? No, I can’t, not right now. Do you know what? I’ll meet you later, okay?”

Hanging up, Leyla kept her secret phone call close to her chest.

She didn’t mention it to anyone and just carried on with her evening.

But her behaviour has fans convinced she is hiding something huge from Liam and the others.

And fans are sure they know who she was talking to – Andrea Tate.

While Meena left Andrea to die in a fire – her body was never seen and so it’s possible that she survived and will make a dramatic return during next week’s trial.

One said: “Andrea is still alive thats who Leyla is talking to lol!”

Another added: “I wonder… is Leyla taking phone calls from Andrea? We never saw her body and Charles even conveniently remembered she existed today….”

Emmerdale bosses previously confirmed Leyla was hiding a shocking secret from her nearest and dearest.

Producer Laura Shaw teased: “We’ve seen her be a huge support to Liam through the loss of his daughter Leanna but is all as it seems?

“Is Leyla really coping as well as she seems to on the surface or is there a bit more going on there that we’ll uncover?”