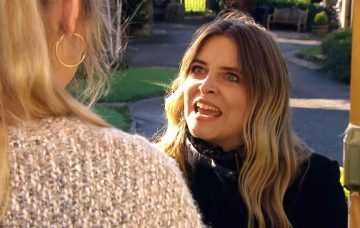 Charity Dingle can do no wrong in the eyes of many Emmerdale fans, but she went too far in last night’s episode according to some.

Behaving like an over-protective mama bear towards Ryan, she warned Dawn Taylor to stay away from her son, even bribing her with money to do so.

And the deed had devastating consequences which left fans in a fury.

Dawn may not be the most popular Emmerdale character, but she’s had a tough life and isn’t it Ryan’s decision who he dates anyway?

Convinced that she is taking Ryan for a ride, the landlady hurled all sorts of verbal abuse at Dawn and even lied about Ryan’s feelings – saying he’d changed his mind about dating her.

She blasted: “I know how this works. You’re looking for an easy target, someone disabled, vulnerable, someone who’s willing to pay for it, who’s so grateful for the attention…”

“That’s not how this is,” Dawn insisted.

But Charity hissed: “Well don’t tell me you fancy him because I don’t buy it!”

We’re not sure Ryan would appreciate being spoken about like that!

As if getting a tongue-lashing from Charity wasn’t bad enough, she then bribed her to leave the village – even cruelly encouraging her to buy a drugs fix.

The tragic outcome of the encounter was that Dawn went on to buy heroin and relapse – and horrified viewers saw her overdose and collapse on the floor of the pavilion.

While it looks like she’ll pull through, it’s unclear whether fans will ever forgive Charity for being so callous.

Ugh what a cow Charity is!! 🤨 #Emmerdale

#Emmerdale Charity once again showing how shit a mum she really is. Ryan coped without her for 27 yrs I'm sure he'll be ok 🙄

#emmerdale understand charity being protective of ryan, she is just going about it the wrong way

Another said: “Ugh what a cow Charity is!!”

A third tweeted: “Charity once again showing how [bleep] a mum she really is. Ryan coped without her for 27 yrs I’m sure he’ll be ok.”

Other fans were on Charity’s side, believing she only did what any mother would do…

At the end of the episode, Ryan had discovered the truth and told his mum: “I don’t want anything to do with you anymore.”

The exchange got cheers from fans, who tweeted “what goes around comes around Charity!” and “Ryan deserves better”.

But has Ryan disowned his mum for good?

Are you Team Charity? Leave us a comment on our Facebook page @EntertainmentDailyFix and let us know what you think!