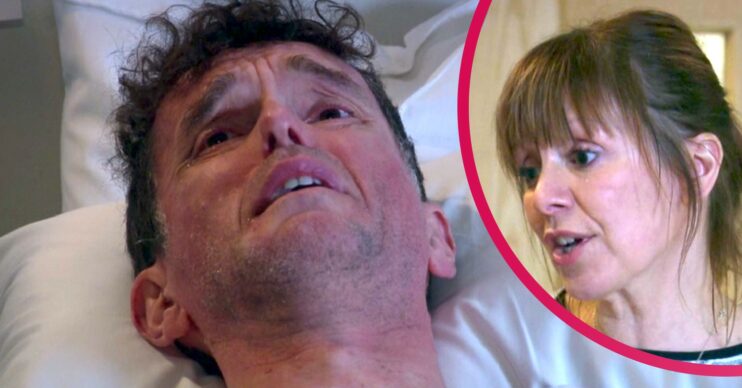 The chef cut himself off from everyone

Emmerdale fans were in tears after Marlon Dingle made a shock decision in last night’s episode.

The chef suffered a devastating stroke earlier this week.

He has been left fighting for his life in hospital with the support of partner Rhona and his friends and family.

However last night it all became too much for him and he decided to ban all visitors.

He felt humiliated after Rhona burst into tears watching him be spoon fed by a nurse.

Rhona was overcome with emotion at the scene and she couldn’t bear to watch.

She fled the room in tears leaving Marlon feeling humiliated.

And it made up his mind for him.

Later when the nurse assessed Marlon, she returned and he had something to tell her.

The nurse left them alone and Rhona opened up to Marlon.

She said: “Listen, about before, I’m so sorry.

“I never meant to embarrass you. I have no idea how difficult this must be for you.”

But as she tried to apologise to him for her behaviour, he revealed he had written a note for her.

He showed her the message that read: “no visitors, go home”.

Utterly devastated Rhona tried to change his mind, telling him: “Marlon, this is me, this is us.

“I’m sorry that I upset you. I never meant to. And no matter what happens, it will not affect how much I love you. Please don’t push me away.”

But he didn’t want her there – and she was devastated.

Rhona couldn’t look back as she rushed out of the room, but Marlon immediately regretted his decision.

Sobbing, Marlon looked broken by his ordeal. And viewers felt the same.

Read more: Emmerdale: Is Mark Charnock the most underrated actor in soap?

One said: “That last scene of Marlon crying alone in his bed, damn that’s heartbreaking.”

A second said: “Emmerdale is breaking my heart. Poor Marlon.”