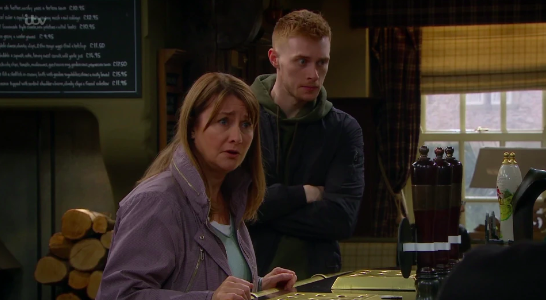 She's not welcome - by villagers or viewers

Lee Posner’s mum Wendy has moved into Emmerdale – and no one is at all happy about it.

On Tuesday night (December 3), Wendy tried to settle in to the village in a bid to be closer to her unborn grandchild – but the residents weren’t pleased to see her, and nor were the viewers.

In fact, those watching from home have slammed the soap for what they believe is a “sick” and “perverse” plot which “sends the wrong message to victims of abuse”.

And it’s not the first time this divisive storyline has angered fans for “making a victim” out of the wrong-doers.

Since discovering Victoria’s pregnancy, Wendy has been determined to see her grandchild once he’s born, even more so after Lee was accidentally murdered by Victoria’s brother Robert.

But with Wendy refusing to believe that her son Lee raped Victoria, she has become a thorn in the side of the pregnant mum-to-be.

It is sick. It sends the wrong message to victims.

Last night, Victoria found out about Wendy’s new living arrangements and was devastated.

Wendy was also subjected to an attack, when someone smashed the window of her new home making it very clear she’s not welcome.

And fans agreed, expressing their disgust at the storyline.

One wrote: “This is why I will no longer be watching. She doesn’t acknowledge her son’s actions, harrassed Vic and you re-traumatise the victim. It is sick. It sends the wrong message to victims.”

Another said: “So the plan is to offend every person who has ever been a victim of sexual assault? Or is this just a happy side effect of the current writing? Disgusting.”

So the plan is to offend every person who has ever been a victim of sexual assault? Or is this just a happy side effect of the current writing? Disgusting.

This is why I will no longer be watching. She doesn't acknowledge her son's actions, harressed Vic and you re-traumatise the victim. It is sick. It sends the wrong message to victims.

@emmerdale 1/How dare you put horrible Wendy in village near Aaron(horrible Vic),Rob is in prison/#Robron have their destroyed lives,frightfully all what you show is that you support the sexual abusers (horrible Rat)/ rapists (Lee)/their families against victims😡

It's awful that you make Wendy move there to hurt Aaron and Vic even more, they suffered enough already!!!! :(((((

A third added: “This storyline is so rotten and moving Wendy into the village just compounds that. There’s so much wrong with this that it’s made Victoria’s character unbelievable and pathetic.

“If I was actress Isabel [Hodgins] I’d be having a word with the producers or leave like so many others are.”

“This is now becoming very perverse,” said one more.

Another said: “Seriously? You’re really going to try to make Wendy appear the victim? Wrong. What she is doing to Victoria is victim harassment. The sooner Wendy leaves the better.”

Others begged Vic to call the police on Wendy for harassment, while others said the scriptwriting on the soap had “gone downhill”.

One said: “I mean, really, would Wendy seriously move into a village where not one person likes her? The writing in Emmerdale has gone downhill at a rate of knots and the programme is struggling. It needs a rethink and some sort of overhaul.”

“Emmerdale isn’t going to have any viewers left by the time this story wraps up,” warned another.

In scenes to air on Thursday (December 5), Victoria is alarmed when she starts to feel contractions worrying the baby is coming too early. But she’s aghast when midwife Wendy is the one to arrive to help…