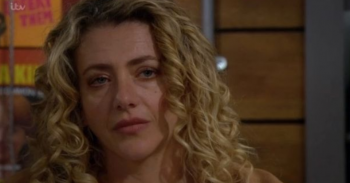 The strain is getting to her!

For a moment in tonight’s visit to Emmerdale it appeared that Maya might be about to confess to her sordid relationship with Jacob.

But viewers were distracted by something else… Her face. She looked absolutely exhausted, ill even…

Fans were quick to point it out on Twitter…

How come Maya looks so tired?#Emmerdale

Another settled on a general ‘rough’…

Some others suggested she was on drugs!

#Emmerdale Has Maya got a cold? Either that or she’s high as a flipping kite.

Another speculated about pregnancy!

With the strain of her grooming Jacob possibly about to be exposed by Liv hanging over, all of the above could be plausible for the unhinged character!

Meanwhile, the odd couple looked backed into a corner after the schoolboy was caught red-handed with Val’s ring, which he had stolen to cover, in part, Liv’s bribe.

Unfortunately for him, on two counts, he learned in this episode that David was going to propose to Maya… and he wanted to use Val’s ring.

As he went to retrieve it, he was intercepted by granddad Eric. When Jacob refused to explain why he’d taken it, Eric dragged him to see dad David, threatening the police.

As Jacob was facing the Spanish inquisition, Maya walked in and said she could explain what was going on.

Fans’ breaths were held as we prepared for her to drop the bombshell she had been bedding the teenager.

But then… well, THEN… she spun some yarn about Jacob having got caught up with the wrong gang, and he keeps spending money to impress them…

David was furious she had kept this (lie) from him, but Pollard agreed to keep the police out of it.

Viewers were disgusted by the schoolteacher’s latest behaviour, more so when she then threatened to destroy Liv’s life…

Every single night I think the whole Maya storyline in Emmerdale is going to come out but nope it keeps going. It’s proper driving me mad now 😩🙈 #Emmerdale

Urgh lies, lies and more lies. Maya was never going to tell the truth. Hopefully soon it will all come out. #Emmerdale

Can Maya just be found out already? She’s really bugging me now #Emmerdale

I cannot WAIT for Maya to get her comeuppance #Emmerdale

Maya’s lies keep getting worse and worse, how does everyone keep believing her. #Emmerdale