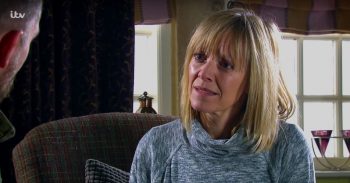 They say it's pandering to a stereotype...

Emmerdale fans have accused the soap of “stereotyping” and “insulting” women over Rhona Goskirk’s hysterectomy storyline.

This week, Rhona returned home after her life-changing hysterectomy, which she had to have after an accident at the farm left her with internal injuries.

However, since coming home, Rhona’s found herself having symptoms of the menopause – which she’s been trying to hide from boyfriend Pete Barton.

Instead of talking to Pete, Rhona has found comfort talking to her exes Paddy and Marlon.

After learning of Chas’s pregnancy, Rhona was understandably upset, knowing that she can no longer have any more children.

But some fans weren’t feeling any sympathy towards the character, and slammed the ITV soap for the plot which they say is “insulting to women”.

One said: “You are straying way too much into stereotyping here.

“Get some perspective on modern women and less of this ‘I don’t feel like a woman anymore’. Unless you want the rumour spread that men are writing those particular scenes…”

You are straying way too much into stereotyping here.
Get some perspective on modern women and less of this 'I don't feel like a woman anymore'.
Unless you want the rumour spread that men are writing those particular scenes…

For pity sake Rhona you had your operation last week, you wouldn’t be going through the menopause that quickly. #Emmerdale

Rhona put your knees down. This is not possible after a hysterectomy. Ffs @emmerdale do some research about major surgery!! #emmerdale

@emmerdale did you actually talk to any women who have had a hysterectomy before writing this storyline or did you get your recovery info from a male doctor? Absolutely no way Rhona would be recovering like she is! Took me over 2 months after mine to be half as active! #GetReal

A third wrote: “This storyline is annoying and dumb and insulting to women.”

“For pity’s sake Rhona, you had your operation last week, you wouldn’t be going through the menopause that quickly,” blasted another.

While one more said: “#Emmerdale. I’m a bit confused about Rhona and her INSTANT menopause. It’s ONLY BEEN ONE DAY. Wait for the night sweats, the flushes, the chills, then you won’t see Pete for dust.”

However some people thought her portrayal was accurate.

She said: “My best friend Vic had a very similar operation to Rhona, so I spoke to her and she was very candid and I spoke to people at work.

“There are quite a few people going through it themselves. Either menopause that has come on organically or been induced by a hysterectomy.”

She also revealed that people don’t like to talk about it, as it’s an “admission of getting older”.

Do you feel sympathy for Rhona? Leave us a comment on our Facebook page @EntertainmentDailyFix and let us know what you think!