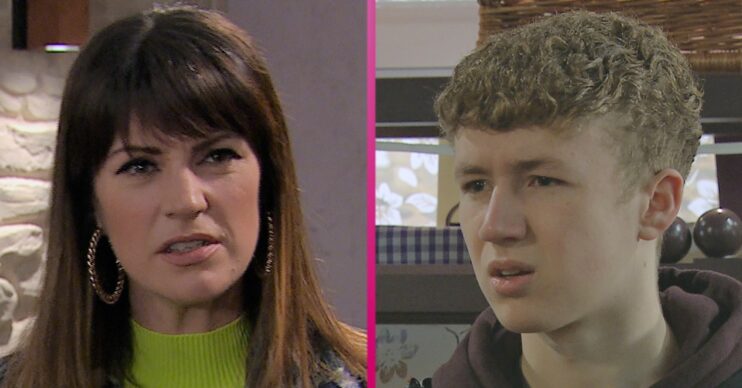 Kerry was furious with Noah

Emmerdale fans have slammed Kerry Wyatt branding her a ‘hypocrite’ for seeking revenge on Noah Dingle.

Kerry was disgusted when she found out Noah had been stalking teenager, Chloe Harris.

Wanting to protect Chloe, Kerry sought out revenge on Noah by pushing him into an empty grave.

However fans slammed Kerry for trying to get revenge on Noah when she has got away with killing Frank Clayton.

This week, Chloe was horrified when she found out Noah had been stalking her.

She also realised he’d been using a drone to spy on her while she’s sleeping.

When she confronted Noah, he tried to trap her in his house and cover her mouth to keep her quiet.

Charity soon walked in and was horrified at what Noah had done.

Chloe ran off and told Kerry, Al and Bob about Noah’s stalking.

In last night’s scenes (Thursday, May 12) Kerry decided to take action and approached Noah in a graveyard, calmly asking him if they could go on a walk for a chat.

She tried to convince him to hand himself into the police and they stopped by an empty grave.

Noah told Kerry he didn’t think he should hand himself in as he isn’t a ‘psycho.’

Kerry responded saying: “Well can you see why we might think that you are?”

As Noah tried to leave, Kerry wouldn’t let him go and distracted him before pushing him into the grave.

When Noah was in the grave begging to be let go, Kerry said: “If I don’t do this, how long before you’re back out there flying your little drone?”

Kerry then covered the grave with a wooden board before sitting on it.

Soon David came along and saw what Kerry had done. Although he was furious with Noah for trying to frame Jacob for his stalking, he wanted her to release Noah.

David helped Noah out of the grave.

However fans were quick to slam Kerry, pointing out she and Amy accidentally started the fire that killed Frank Clayton and hasn’t paid for her crimes.

Kerry and Amy killed Frank and yet set themselves up as judge n jury against Noah. Just a little reminder script writers because you appear to have forgotten but viewers don't! Also Cain is an actual sex offender never brought to justice! #emmerdale

Kerry and Amy are hypocrites though. #Emmerdale

#Emmerdale
Kerry got a short memory hasnt she, didn't she set a buildings on fire with someone in it…

The HYPOCRISY of Kerry and Amy. Do they not remember they killed a man ?? #emmerdale

#Emmerdale Kerry not everyone's a killer. Well apart from u & your daughter 🙄🤬

Kerry you didn’t get a slap on the wrist when you murdered Frank you dopey cow. You walked away scot free. #Emmerdale pic.twitter.com/ID55CjTwBF

Kerry is a vile hypocrite #emmerdale