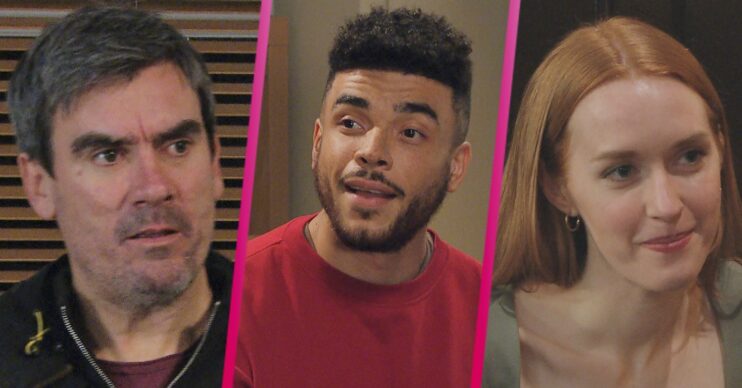 Emmerdale fans have turned against Cain Dingle, branding him a ‘hypocrite’ for warning his son Nate off Chloe Harris.

Cain wasn’t happy when he found out Nate had been spending time with teenager Chloe.

But fans have been quick to point out Cain has been involved with teenage girls in the past when he was an adult.

Emmerdale: Cain finds out about Chloe and Nate

A few weeks ago, 31-year-old Nate was upset that he wouldn’t be able to see his daughter Frankie, who lives with his ex Tracy in Nottingham.

He ended up spending the night with Chloe Harris, who is 19.

Chloe was interested in seeing Nate again, however he was more focused on getting back with Tracy.

After learning Tracy is seeing someone else, Nate was upset and Chloe was there for him.

In last week’s scenes, Chloe found her missing journal in Jacob’s backpack and presumed he broke into her room and took it. Unbeknownst to Chloe, it was Noah who took the journal and framed Jacob.

In the Woolpack, Chloe was telling Kerry about Jacob taking her journal when Nate walked in.

Soon Chloe headed out and Nate followed with Vanessa behind them.

Chloe told Nate what happened and he apologised for cancelling their recent plans.

Soon Vanessa walked out and pointed out Chloe was a bit young to be “playing stepmum.”

She told Nate that Chloe’s a kid and he needs to a get a grip.

Chloe realised Vanessa may be right and he seemed embarrassed to be seen with her.

The next day, Cain approached Nate to tell him Vanessa told Moira about Nate and Chloe.

Cain said to Nate he’s ‘hanging out with schoolgirls’ but Nate was quick to tell him Chloe is 19 and that he’s heard things about Cain.

Cain then said: “Let’s not make this about me. What do you think Tracy’s going to think when you’ve got Frankie for the weekend, and you’re hanging around bus stops with teenagers?”

Nate ignored his dad and soon Al joined in, telling him that Chloe isn’t a child.

Al then said Chloe will learn from her mistakes, but with Nate it’s ‘all in the genes’

Cain then warned Nate it was Chloe or his child.

However fans slammed Cain, pointing out he groomed and abused 15-year-old Ollie Reynolds in 2001, when he was an adult, to get revenge on her mother.

They also pointed out Cain slept with Amy Wyatt when she was 17 and got her pregnant with his son, Kyle.

Cain would know all about hanging out with school girls. The hypocrite #Emmerdale

#emmerdale Oh yes, that's a good point! – Ollie was 15 when Cain slept with her to get at her mother, Angie.
People in glass houses, Cain!

Cain you are a hypocrite Ollie Reynolds ring a bell! #Emmerdale

Caine has a cheek talking about Nate being too old to date Chloe , if he's Kyle's dad , Amy must have been about 12 when she had him ! #emmerdale

#Emmerdale now now Cain I'd stfu about Nate being with younger girls. At least Chloe is over 18 🤔🤔 we think. At least she's not 15 like Ollie Reynolds was u dirty old man 🤢🤮