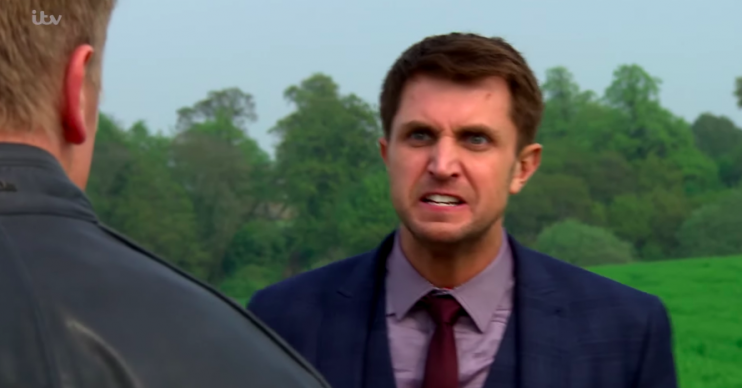 Fans of Emmerdale were left sickened after rapist Lee issued a vile insult against his victim Victoria Sugden.

The car salesman was tracked down in last night’s episode (June 14) by Victoria’s vengeful brother, Robert, and his husband Aaron Dingle.

At first, Robert just wanted to get him to confess to raping Victoria, but when talking to him didn’t work, he turned aggressive.

Speeding in the car they had taken for a test drive from Lee, Robert demanded he tell the truth before pulling over.

Lee tried to run away, but there was nowhere to go and Robert tried to attack him.

The sick rapist instead decided to try and defend himself, telling Robert and Aaron: “Whatever you’ve been told, none of it’s true.

“I’ve been through this with the police, as far as I’m concerned it’s over. There’s nothing to tell.”

He seethed: “She’s obviously not right in the head, is she?

“I’m not someone who goes around forcing myself on girls, I don’t need to.

“We were having a good time, it was a laugh. My mate tried it on with her, I helped her sack him off.

“She was well up for it, it was obvious what she wanted. Why else would she have invited me back to hers? She wanted it as much as I did – all over me like some cheap tart.”

His final insult had fans at home raging at his vile comments.

One furious fan said: “‘All over me like some cheap tart’ Really Lee? In his [bleeping] dreams maybe #Emmerdale #ConsentAlways.”

Another added: “Lee is a filthy rapist #Emmerdale.”

However, others were more critical of Robert’s cunning plan to just ask Lee to confess, commenting: “Did Robert really expect Lee to admit to raping Victoria to him & Aaron? #Emmerdale.”