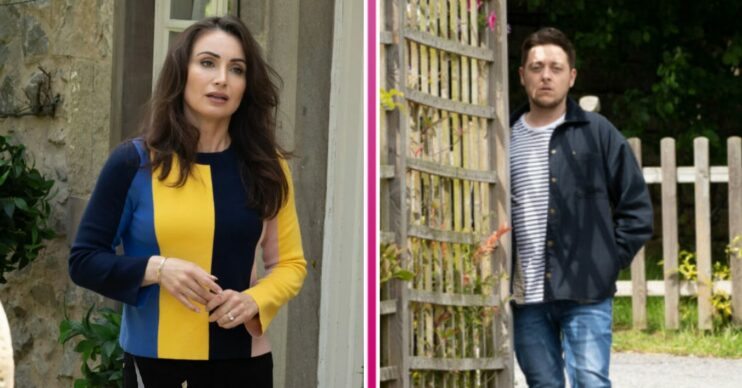 Emmerdale fans are all saying the same thing about ‘thick’ Leyla

No Leyla, you're not stupid at all...

Emmerdale fans have been laying into Leyla Cavanagh after the wedding planner’s poor security measures allowed Matty Barton to swipe a holdall of drugs with ease.

Leyla, played by Roxy Shahidi in the ITV soap, has agreed to hide cocaine on the premises of Take A Vow for dealer Callum.

He turned up with enough Class A’s to ‘buy a small island’ and warned Leyla to not go losing it.

So it was obvious from that moment on that something terrible was going to happen. You know, like someone breaking in and stealing the stash.

Why is Leyla hiding drugs in Emmerdale?

But no one expected Leyla to make it quite so easy.

After declaring, quite adamantly to Suzy, ‘Well, I’m not stupid,’ Leyla dropped her key to her business in a plant pot outside.

In broad daylight and in front of Matty’s eyes.

Matty – who is on a mission to get revenge on Suzy for inadvertently supplying the drugs that killed his sister Holly in 2016 – let himself into Take A Vow.

After about two seconds of frantic searching, he found the key to the cupboard where Leyla had hidden the drugs.

He then swiped the bag and did a runner.

Viewers took to Twitter to marvel over Leyla’s lack of foresight.

“Darwin award goes to Leyla… looking after a mammoth amount of coke and you put the key to your office under a plant pot and the key to the cupboard on your desk…just wow!” wrote one.

Another said: “How convenient Leyla not leaving her office secure knowing she has thousands of pounds worth of coke stashed in there. She would be guarding it with her life.”

“How thick is Leyla, not only leaving the premises key in a pot next to the door, but not keeping the key to the locked cupboard with the drugs in on her,” added a third.

And a fourth quipped: “And Leyla is thick to leave a bag of drugs like that in your work cupboard”.

How convenient Leyla not leaving her office secure knowing she has thousands of pounds worth of coke stashed in there. She would be guarding it with her life. #emmerdale

Darwin award goes to Leyla… looking after a mammoth amount of coke & you put the key to your office under a plant pot & the key to the cupboard on your desk…just wow! #emmerdale

Matty’s theft is certain to lead to big trouble for her, with some viewers even thinking she could get killed as a result.

Leyla’s been struggling with addiction since Suzy arrived in the village earlier this year.

And while she’s been lying to David about kicking the drugs, she’s still very clearly got a problem.

ITV recently teased some autumn storylines for the soap and Leyla will be playing a prominent role.

Will her drug addiction lead to her death?