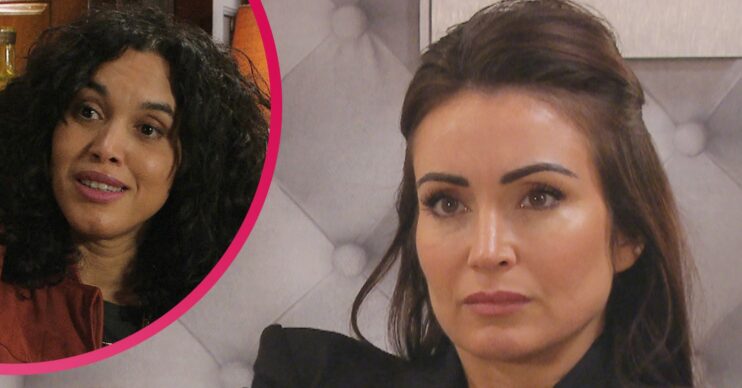 Suzy realised something was going on with Leyla

Emmerdale fans have been left baffled as Leyla Cavanagh did cocaine at a family meal and no one seemed to notice her behaviour.

Leyla managed to get cocaine off Jason in last night’s episode (Tuesday, June 22).

She later went out for an anniversary meal with her husband Liam, David and her son Jacob.

It was clear she had taken cocaine, but fans were shocked that no one noticed her erratic behaviour.

A few months ago it was revealed Leyla had been doing cocaine with Suzy, Vanessa’s new love interest.

However it was revealed Suzy knew Holly Barton after meeting her mum, Moira.

When Suzy discovered Holly died of an overdose the same day she gave her money to buy drugs, she was horrified and vowed not to do cocaine anymore.

But Leyla has been struggling to stop.

Recently she was able to find Jai’s old drug dealer Jason after Suzy refused to give her the contact information for her dealer.

In last night’s episode Jason found Leyla in Take A Vow and offered her a deal on cocaine.

Later Leyla went for a meal in The Hide with her family to celebrate her and Liam’s anniversary.

She offered to pay for all of their meal, was talking loudly and was acting out of character.

Why isn’t anyone clocking onto Leyla’s behaviour other that Suzy?

The only person who noticed her behaviour was Suzy.

However fans were wondering how no one else noticed that Leyla was clearly not herself.

Leyla already seems really high – how is nobody noticing her behaviour? She is practically shouting at David 😬😬 #Emmerdale

What gets me is David and Jake must be dumb as two short planks, not to know leyla is off her face on crack, how stupid can a writer be? #Emmerdale

Why isn’t anyone clocking on to Leyla behaviour other than Suzy? #Emmerdale