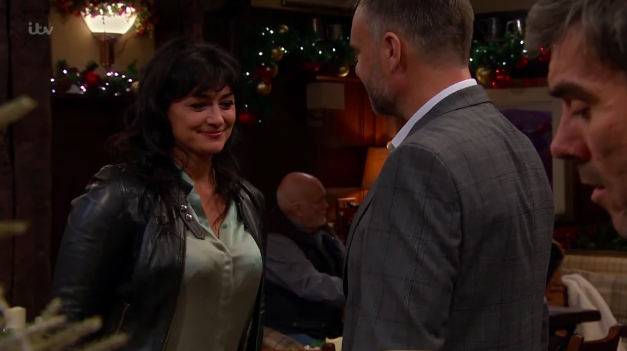 Did you recognise him?

Moira Dingle met up with a potential new client in Emmerdale on New Year’s Day, but it didn’t exactly go to plan.

Newcomer George arrived in the village in the hope of forming a business partnership with farm owner Moira, but it turned out that he wanted plenty more besides too…

And as viewers cringed at their encounter, others recognised the actor from his previous role in rival BBC soap EastEnders.

In fact, Stuart Laing who appeared as George, played Rob Minter in EastEnders between 2006 and 2007.

The sleazy guy with Moira in Emmerdale was Rob from EastEnders back in the day.

Soap fans with good memories will recall his character had an affair with Dawn Swann, played by Kara Tointon.

Read more: Emmerdale: Moira to lose son Isaac after getting drunk while caring for him?

Rob was central to an explosive storyline as he conducted an on-off love affair with Dawn behind the back of his wife of 10 years, May Wright.

The situation took a turn for the worse when Dawn revealed she was carrying Rob’s baby – and May couldn’t have children.

Eventually, Rob kidnapped Dawn and handcuffed her to the bed so his wife could perform a Caesarean on her – and try to steal her baby.

The storyline prompted over 200 complaints and the plot had to be rewritten to avoid further offence.

His Emmerdale character had just as few scruples, as he made a move on Moira and turned nasty when she refused his advances.

In recent weeks, Moira has been trying to sort out the farm and met up with George in the pub.

And some eagle-eyed fans were quick to point out his soap connections.

The sleazy guy with Moira in #Emmerdale was Rob from #Eastenders back in the day. Mad May’s husband who had an affair with Dawn!

One wrote: “The sleazy guy with Moira in #Emmerdale was Rob from #EastEnders back in the day. Mad May’s husband who had an affair with Dawn!”

Another said: “That bloke with Moira was in EastEnders. He played Dawn’s boyfriend. I think his name was Rob #Emmerdale.”

Do you want Moira and Cain to get back together? Leave us a comment on our Facebook page @EntertainmentDailyFix and let us know what you think!