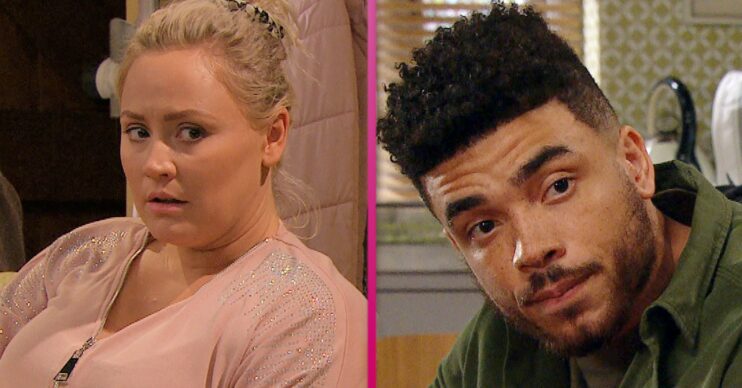 Emmerdale fans question why Tracy and Nate are together

They don't seem that happy...

Emmerdale couple Nate Robinson and Tracy Metcalfe have had it tough recently.

Tracy has been in the depths of post-natal depression following the birth of their first child together, Frankie.

But Nate has stood by her side and supported her through thick and thin.

Despite them being committed to each other and committed parents to their little girl, things just don’t seem right. So should they even be together at all?

Does Nate cheat on Tracy in Emmerdale?

Tracy certainly knows something isn’t quite right between her and her other half. Tonight (Thursday, November 11) he went off into town on the lash with Billy, while she waiting at home for some alone time with him.

Wanting to put the heat back into things, Trace even sent Nate a sexy selfie, hoping it would entice him home from Hotten and into her arms.

But silly Nate smashed his phone and never got the message. Not only that, but he was slightly preoccupied chatting to flirty Fiona, who seemed very interested in him.

Nate then went home with Fi, leaving Tracy wondering where her man was all night.

Although it seemed very clear Nate did not cheat on Tracy, is this really the behaviour of a happy, committed bloke?

Fans question why Tracy and Nate are together

Certainly, the scenes left viewers at home wondering why the couple are still together. Some pointed out all they seem to do is make each other miserable – with one saying they never really seemed happy in the first place.

Why are Nate/Tracey still together? All they do is bring each other down. I’d like more focus on his farm given farming is in Emmerdale roots.

Jai works best as a villain
Al what’s the point of him?
ED should do something with more with Billy.#Emmerdale

Why are Nate & Tracy still together?
I never felt the chemistry before Frankie. Now they have her, it’s like they are staying together for the sake of it. They aren’t in love, they aren’t compatible. Let them split and co-parent? #emmerdale 💚

Why are Tracy and Nate together? I swear they never even had a honeymoon phase, they’re just constantly miserable and ‘working on’ the relationship. It is meant to be fun sometimes. Somebody tell them they’re not being held against their will. #Emmerdale

What’s next for Nate and Tracy?

Coming through the experience of post-natal depression is tough, and Tracy and Nate have worked hard to stay strong.

Being a new parent is draining at the best of time, so maybe we should cut them some slack?