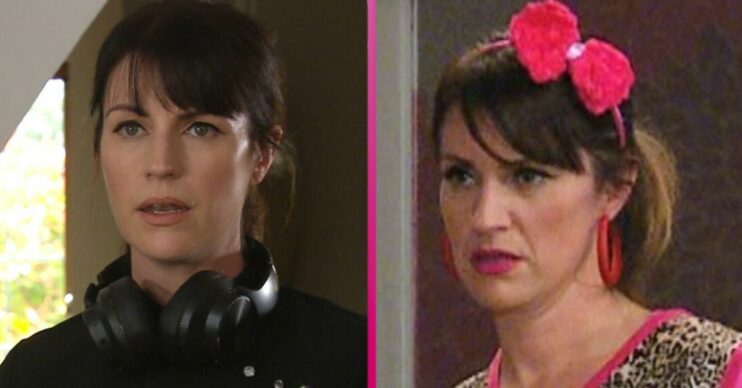 Emmerdale fans all saying the same thing about Kerry’s clothes

Shouldn't she dress a bit more grown up?

Emmerdale fans are all wondering why Kerry Wyatt has reverted to her ‘poor dress sense’ on her return to the village.

When she first made her comeback to the soap in October, her look was more understated and grown-up.

However, since she moved back to the village she has got all of her bright clothes out of the back of the wardrobe again.

Those watching at home don’t understand why the soap is dressing her like this.

One wrote on Twitter: “When Kerry was working for Chloe’s dad she was all subtle make up and always in black… Five minutes back in the village and she’s dressed like Mr Tumble again!”

Another agreed: “So Kerry looked normal in her new job, but now she is back as if she has never been away with her poor dress sense.”

“Why oh why do they dress Kerry like that?” questioned a third, adding: “The character has matured but the wardrobe ain’t.”

A fourth hit out: “Kerry take that kiddies [bleep] off your head ffs.”

Referring to her head gear in a previous episode, one fan said: “Kerry reminds me of Minnie Mouse with that bow.”

When Kerry first popped back up in scenes earlier this year, she was working for Chloe Harris‘s gangster dad.

The job meant she needed to appear grown-up and subtle. She was always in black with her hair neatly arranged.

Even when she was out of her work clothes, the housekeeper simply wore jeans and plain jumpers with a denim jacket or black bomber jacket.

However now she’s back in the village she has bows in her hair, a red leather jacket, and lots of very bright clashing colours again.

Is Kerry going to date Al in Emmerdale?

It’s certainly not a look we’d imagine someone like Al would be attracted to.

Yet, it seems he has got a bit of a thing for Kerry. They are the last two we’d put together, but an unlikely romance is on the cards after they begin flirting this week.

Tonight (Wednesday, December 15) Kerry is full-on as she reciprocates Al’s charms. But Marlon isn’t impressed and makes his feelings known.

However, since Kerry very rarely listens to anyone, especially not regarding her love life, it’s likely she won’t take Marlon’s feelings on board!

What happened when Kerry returned to Emmerdale?

Kerry came bursting back on to screens at the end of October. She was working in the house of Chloe Harris, the sister of Sarah Sugden‘s heart donor.

Chloe’s dad, it turned out was a very, very bad man and not someone you wanted to cross. He’s supposedly a big gangster who’s currently banged-up for all his bad deeds.

However, even though he’s in prison, he was still managing to control Chloe and she had had enough of it. She attempted to run away with Noah Dingle, but Kerry and Charity caught them and brought them back home.

Kerry couldn’t bear to see Chloe so unhappy though and decided to help her. They planned to escape together, but Kerry’s daughter, Amy Wyatt, wasn’t happy about it. Chloe, not wanting to come between mother and daughter, then took matters into her own hands.

Back in November, she went to see her dad in prison and told him to stop controlling her. She then reported back that her gangster dad had told her he wanted what was best for her and promised to leave her alone.

But despite her feeling good for standing up to him, it all came crashing down when he quite literally took her at her word.

His henchman drove through the village and barely even stopped the car before dumping Chloe’s clothes in bin bags at her feet.

Kerry and Chloe are now living with Amy at Victoria’s house and Kerry is back working at the salon.