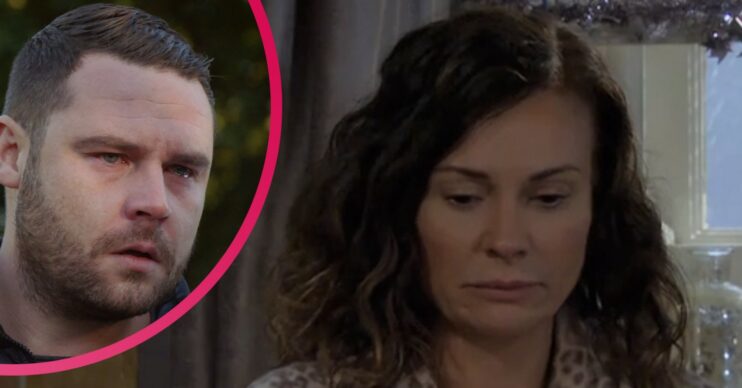 Emmerdale viewers have been mocking Chas Dingle for acting like son Aaron has died following his departure.

After her son left on Monday (December 6) Chas has been moping around the village and even disowned Liv in anger.

She’s behaving like she’ll never see Aaron again and that he’s died rather than just hopped on a plane to Europe.

Chas is acting like Aaron his died in Emmerdale

Wednesday night’s episode (December 8) opened with Chas looking sadly at a picture of her and Aaron. She then received tickets in the post which were meant to be Aaron’s Christmas present.

She was upset as she said: “So much for your Christmas present, eh, son?”

Then last night (Thursday, December 9) she opened up to Belle about how she was feeling.

“Every minute Aaron’s in my head. Every second I see his little face. I just can’t bear not knowing when I’m going to see him again.”

Belle replied: “Once everything settled down, he’s going to be in touch.”

“When is that going to be? A week? A year? What if he gets used to not talking to me? What if he just fades away and we never speak to each other again?”

She added: “I feel useless. I don’t know how to handle it.”

Belle told her it was good she was talking because if she bottled it up it would send her under.

What did fans say about Chas’s hurt?

Those watching at home thought the whole thing was over the top and not necessary.

They mocked Chas for acting like Aaron has died, with some even pointing out she wasn’t bothered when he was going to go on the run with Robert.

One wrote: “He ain’t [bleep] dead Chas. Get over yourself.” Others agreed.

Not bein funny @emmerdale but #chas carrying on over #arron leavin like he’s dead is proper OTT & annoying. Think she was proper harsh on #liv. #Emmerdale

Chas acts like Aaron is died. 🙄🙄 It’s alright Love he’s only gone off to a castle in North Wales 😂😂#Emmerdale

Chas mourning the loss of her son, a two hour flight away from Hotten International Airport. #Emmerdale

Chas is literally acting like she’s never gona see Aaron again. He’s NOT dead. Yet she wasn’t half this bothered when he was tryna go on the run with Robert. Europe is hardly the other side of the world, even it was there’s plenty of ways to keep in touch these days #Emmerdale ❤

No sympathy for Chas in Emmerdale

As well as teasing her for her reaction, viewers have been left furious at Chas this week following her treatment of Liv Flaherty.

Liv is wrongly in prison for Ben Tucker’s murder, but Chas blames her for Aaron’s departure.

Despite Aaron asking his mum to watch out for Liv for him, Chas did the exact opposite. She visited the teenager and told her she was dead to her and not to contact the family again.

Fans were furious at Chas’s behaviour and called her “nasty” and “vile”.

Feeling totally lost and alone Liv overdosed on alcohol in prison last night and ended up violently vomiting and convulsing. It’s not known whether Liv will survive.

If she does pull through, will Chas regret her actions? And how will she feel when she finds out Liv is innocent and didn’t drive Aaron away after all?