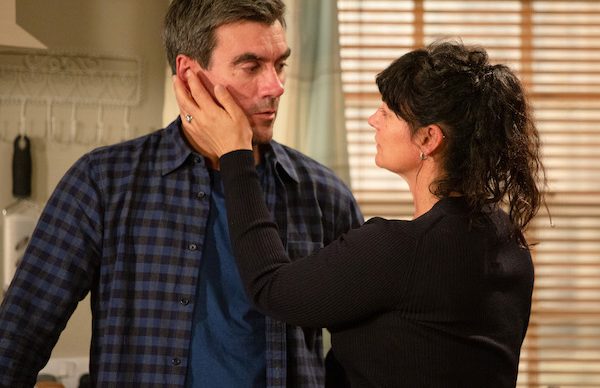 Do you see the attraction?

Cain Dingle’s ex-girlfriend Cara Robinson has arrived in Emmerdale, and it’s fair to say she is a very good looking lady.

On Thursday night (January 9), fans of the ITV soap couldn’t believe their eyes when Nate’s mum arrived in the Dales – with many scratching their heads over Cain’s ability to bag so many gorgeous women!

Many soap fans noticed chemistry between Cara and her ex, with some predicting a romance between the pair.

Honestly I don’t see what any of these women saw in Cain, including Charity and Moira.

In an exciting soap twist in the second of two episodes, Cara made her debut when she was revealed to be the mysterious woman who accidentally ran over a steaming drunk Moira Dingle.

As she took Moira to the hospital, she finally learned what her vengeful son had done to Cain and his marriage.

When Cain and Cara eventually came face to face, the exes traded insults, but fans believed there was a heap of chemistry between the pair.

Others were totally baffled at how Cain managed to get so many attractive women!

One said: “Well, so far I like Cara and honestly don’t know what she saw in Cain in the first place.”

Another said: “Honestly I don’t see what any of these women saw in Cain, including Charity and Moira.”

A third added: “Cara is fit as, how the [bleep] does Cain get all the fit women? #Emmerdale.”

“How did Nate come from that woman? She’s beautiful! And how does Cain get all these women?” wondered another, as one more tweeted: “As if a woman like Cara would look twice at Cain, she could do better.”

As if a woman like Cara would look twice at Cain, she could do better #emmerdale

Blimey. Cain was punching with her #emmerdale

How did nate come from that woman.
Shes beautiful hes him
And how does cain get all these women #Emmerdale

Honestly I don't see what any of these women saw in Cain, including Charity and Moria then in Moria case I loved John

also how on earth did cain even manage to pull cara, she fit. #emmerdale

As if Cain pulled Nate's mum AS IF #emmerdale

Maybe it’s the bad boy in him!

Viewers know that Cara became pregnant with Cain’s child, but Cain didn’t even know he existed.

Cara had lied to her son Nate about Cain’s lack of interest, protecting him from Cain’s racist family when he was a baby.

He embarked on an affair with Cain’s wife Moira, eventually splitting them up – and leading Moira to drink herself to oblivion.

Something tells us Moira will regret bringing Cara to the village… Will Cara and Cain eventually get together?

Do you understand why so many women are attracted to Cain Dingle? Leave us a comment on our Facebook page @EntertainmentDailyFix and let us know what you think!