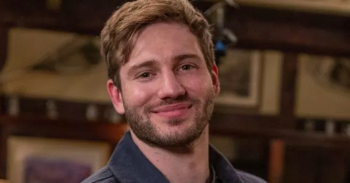 Yes he is rather handsome, isn't he?

Jamie Tate has been in Emmerdale for less than a week, and already soap fans predict a love affair for the handsome newcomer.

Despite the dramatic way he arrived on Tuesday (April 30), fans warmed to Kim’s son immediately – especially as he appeared to be nothing like his venomous mum.

And they have high hopes for the character – who they believe will fill the void left by Joe Tate.

As he settles into village life, some viewers predict Jamie will become romantically involved with Belle Dingle.

We have to admit, they’d make a cute pair and she deserves someone who isn’t a psychotic serial killer like her last partner Lachlan White!

During Tuesday’s visit to the soap, Belle helped Jamie land a job at the vets, and viewers picked up a frisson of chemistry in the air between the couple.

One wrote: “Belle and Jamie are fully going to be a couple then.”

Another said: “Belle and Jamie are going to get together. I’m calling it.”

A third added: “So there’s only two years between Belle and James? Somehow I think these two are going to get together… #Emmerdale.”

Belle and Jamie are going to get together. I’m calling it. #Emmerdale

Awwwwh! Romeo and Juliet in the making! (Belle and Jamie) #Emmerdale

So there’s only 2 years between Belle & James…. somehow I think these two are going to get together… #Emmerdale

Me thinks there might a romance between Belle and Jamie 🙊#Emmerdale

Oh my god I just realised they could pair Jamie with Belle. Forget Debbie and Joe, we're looking at a new Tate/Dingle power couple. #Emmerdale

Soon Belle will be jumping into Jamie’s bed #emmerdale

“Awwwwh! Romeo and Juliet in the making! (Belle and Jamie),” gushed another.

One even declared Belle and Jamie Emmerdale‘s “new power couple”.

While most were shipping the possible match, others warned James to steer clear of the Dingle family altogether!

After all, Belle herself warned him that the “Tates and Dingles don’t exactly mix”.

Jamie’s on-screen mother Claire King (who plays Kim Tate) has previously suggested that Jamie and Belle could become an item, telling Digital Spy: “Belle has got a little interest in him.”

Who would you like to see Jamie Tate couple up with? Leave us a comment on our Facebook page @EntertainmentDailyFix and let us know what you think!