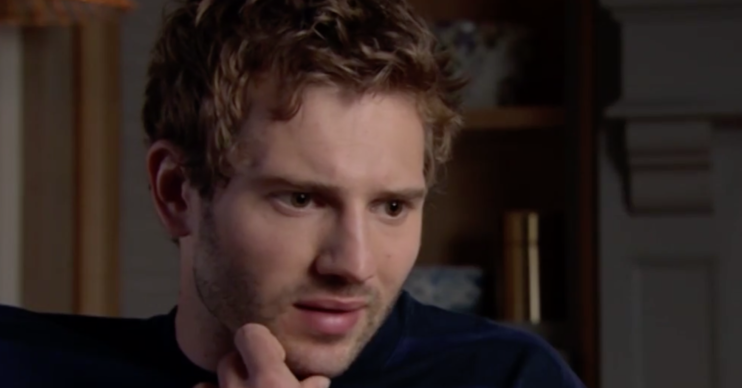 Emmerdale fans are convinced Jamie Tate and Luke Posner are going to have a steamy affair after spotting their “sexual chemistry”.

The millionaire vet clashed with chef Luke after trying to illegally evict him and his nurse mum Wendy.

However during their rows, fans couldn’t help but notice a frisson between them.

Spotting “sexual tension”, viewers thought they would make a great couple and predicted they would get together.

Some suggested Luke might cheat on Victoria with an affair with Jamie.

One tweeted: “I’m sorry but if #emmerdale don’t turn Luke bisexual they’ve missed a trick there! And I know – Victoria – yeah not feeling that at ALL, more sexual tension with Jamie in 2 minutes (and Aaron early on) than six months with Vic!”

“So who’s Luke going to end up with? Andrea or Jamie?” said another.

A fourth viewer wrote: “Jamie and Luke should get together.”

But would Luke cheat on Victoria? Actor Max Parker has previously ruled out a romance for Luke with Aaron Dingle after fans suggested it could happen.

He said: “I think the idea is fun, but I think what the fans want to see is very different [from the storyline]. I see a lot of things online where people are like ‘No!’ and then others say ‘Yes!’

“I just think that, at the minute, Luke has only got eyes for Victoria.

“I think a lot of time in soap episodes, with people that hate each other and have a feud, people are always going to speculate about whether they actually like each other and stuff. But I don’t think so.”

The couple met on Kris’ last day of filming on Emmerdale. As his character was wheeled out, dying, in hospital, Max’s Luke was in the follow on scene.

They never shared a scene together but the off-screen friendship grew into a fully-fledged romance.

“It’s great to meet someone through work and have so many things in common and an understanding of each other’s jobs,” Kris told the Mirror.

“We didn’t actually share any scenes together on Emmerdale but kept in touch after I left.

“I don’t want to jinx things. We are seeing how we get on. We had a great time on holiday in Dubai. Let’s see how it goes.”