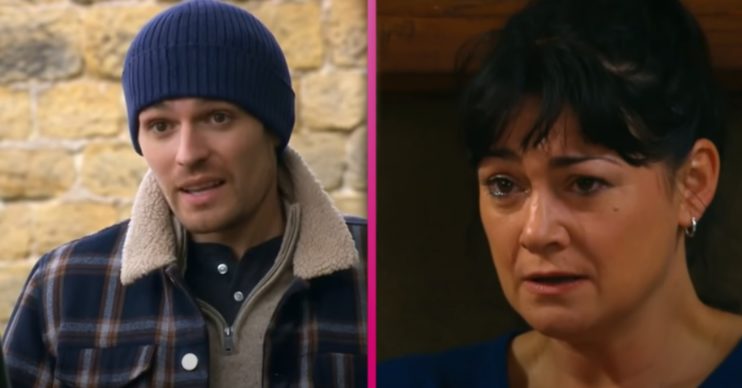 Mackenzie isn't happy with his sister!

Last week, Mackenzie arrived in the village and immediately it became clear that he doesn’t have a good relationship with his sister.

Mack demanded £5k from Moira in return for her ex-husband, Cain, who he had kidnapped.

In Friday’s episode (October 30) Moira got some money together to try and get Cain released. However she didn’t have enough and Mackenzie demanded she take him to Butler’s Farm to get more.

Meanwhile Cain managed to get escape from being tied up.

Back at the farm, Moira told her brother that no matter what happened in their past, she still cared about him, However Mack was furious at his sister, blaming her for ripping their family apart.

Soon Mack dropped a huge bombshell on Moira, that their mother had died and she was left devastated.

But viewers have started to come up with theories as to why Mack is so angry at his sister. One theory suggests that Mackenzie isn’t actually Moira’s brother, but her son.

Mac better not be Moira's son. That storyline's been overdone too much now. #Emmerdale

This Gonna be Moira's Son not her brother ain't it

Emmerdale: What’s next for Mackenzie?

This week, Moira tells Mackenzie she has some things she needs him to hear.

Mac better not be Moira’s son.

But it seems their conversation doesn’t go well as Moira ends up sobbing alone. Can they ever repair their tattered relationship?

Later when Cain spots Mack in the village the two men square up to each other. The mechanic tells him if he ever sees him in the village again he’ll leave in a coffin.

Meanwhile Rhona reminds Moira she’s there if she needs her.  But Cain soon turns up and starts slating Mackenzie.

Moira tells him to stay away. Has she pushed him away too?

Will you be watching this week’s Emmerdale? Leave us a comment on our Facebook page @EntertainmentDailyFix and let us know what you think of this story.