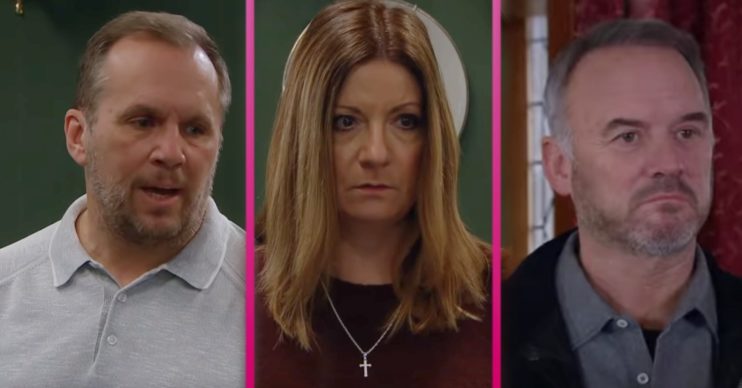 The vicar will be turning to the dark side

Emmerdale fans think they have worked out who will kill who in the upcoming murder – Harriet finishes off Malone!

The soap finally officially confirmed the crime will happen in the village – and offered some clues about what will happen.

The preview teases: “After the murder and cover-up of one of Emmerdale’s most notorious characters, one resident will find themselves spiralling into darkness.

“Intent on self destruction, their actions will have devastating consequences for others…”

And she insisted fans had yet to guess what happens.

She said: “There’s been lots of people trying to guess who’s going to die. Is it Malone, is it Will, is it Harriet?

“Well, all I can tell you is nobody has quite guessed it correctly yet.

“People have been in the right area, the right region, but they’ve not quite guessed it.

Now fans think they have hit on the correct answer.

They think Malone will be the one to die – at the hands of his lover and vicar Harriet Finch.

One tweeted: “I think Harriet will kill Malone!”

A second agreed and added: “I’ve always wanted Harriet to fully murder someone.”

A third said: “It’s not Cain or Moira so likely Malone or Andrea, I think Dawn or Harriet kills Malone @emmerdale #Emmerdale”

Could the vicar become the village’s latest killer?

The show was crowned best serial drama by the academy last night with stars Zoe Henry and Jeff Hordley on hand to virtually accept it.

Jeff said: “A massive thank you to Bafta for this award. It’s a great honour to be nominated for best serial drama but to win it is an even bigger honour.”

Zoe added: “It’s recognition of the hard work we’ve done over the last few years so thank you from the bottom of our hearts.

EastEnders was snubbed for a nomination.