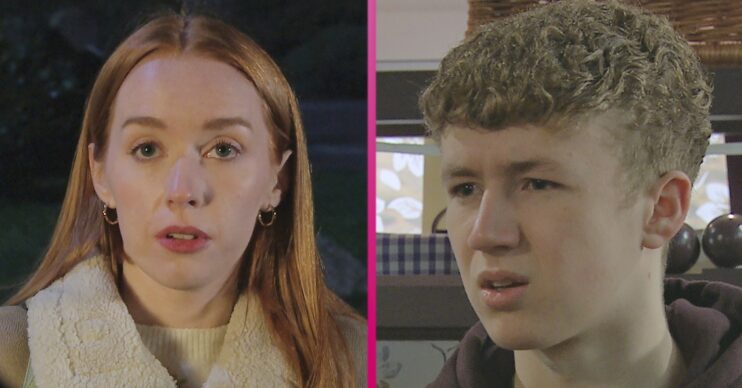 Noah has been following Chloe for weeks

Emmerdale fans are predicting Noah will be killed by Chloe after she discovers he’s been stalking her.

For weeks Noah has been following Chloe, but this week she discovers the horrifying truth.

Now fans think she could kill him as she works out Noah is her stalker.

Noah and Chloe met last year after Sarah found out Chloe is the sister of her heart donor.

Noah and Chloe began secretly seeing each other. However when Charity and Kerry found out, they tried to keep them apart as Chloe’s dad, who is in prison, is very protective.

Eventually Chloe stood up to her father, but he had her kicked out of the family home.

She went to live with Kerry, who had been working for her father.

Soon Chloe and Noah were able to start seeing each other, but after she slept with Jacob, things soon turned sour.

Noah wanted to give their relationship a try, but when Chloe dumped Noah, he turned nasty.

After his cruel words Chloe didn’t want anything to do with Noah.

However over the last few weeks, he’s been desperate to get back in her good books.

He recently began stalking Chloe by putting a tracker on her phone and using a drone to spy on her in her bedroom.

He went a step further by stealing her keys, breaking into her bedroom and taking her journal.

Last week, he framed Jacob for his crimes by putting Chloe’s journal in his backpack.

When Chloe found her journal in Jacob’s possession, she was horrified. Meanwhile Noah was more than happy to step in as the concerned friend.

This week, Jacob is convinced that Noah is the one who took Chloe’s keys and notebook.

Meanwhile Noah invites Chloe over to his to hangout. However when she finds her keys at his, she becomes worried.

He manages to lie his way out of it, but soon Chloe sends him out to get snacks.

Wanting to know the truth, she searches Noah’s laptop and is horrified to find evidence he’s been stalking her.

When Noah returns, he isn’t prepared for Chloe’s frostiness and she confronts him.

He reacts badly by trying to stop her from taking the laptop and attempting to trap her in the house.

Soon Noah’s mum Charity returns home and is appalled to walk in on a terrifying scenario, but what is it?

Some fans are predicting that Chloe will end up killing Noah.

My prediction:
•Noah gets found out by Chloe (finally) who kills him in self defence and asks Kerry to help get rid of his body (body in the woods).
•Jamie shoots Dawn who survives
•Al dies in a crash explosion
• Faith has secret health battle eg her cancer returns #Emmerdale

Noah is gonna die. Chloe will hit him over the head with the laptop #Emmerdale

Who thinks it’s Noah in the grave #Emmerdale #NoahDingle #JackDownham

does anyone else think jacob and chloe should kill noah? worst character ever created! #Emmerdale pic.twitter.com/T8eQi5O4Zs

How do you think this week will end?

Read more: Emmerdale in 2022 – who’s leaving and who’s arriving in the village this year