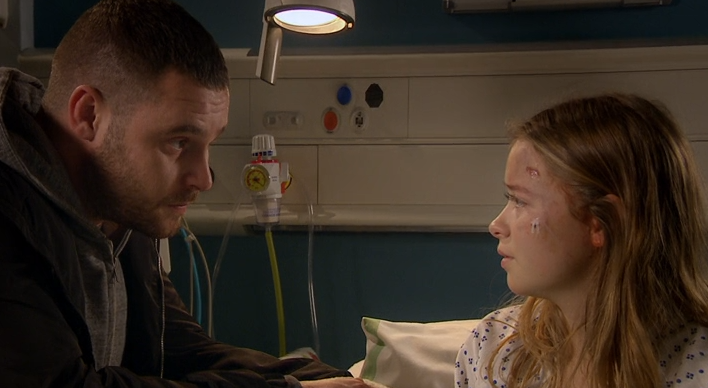 The pair had a heart to heart

Fans of Emmerdale have praised Isobel Steele and Danny Miller for an emotional performance in last night’s episodes (December 16 2019).

Viewers know Danny’s character Aaron Dingle has been struggling since his husband Robert Sugden was sentenced to life in prison for murder.

Since his sentencing, Robert was moved to a prison on the Isle of Wight and decided to cut all contact with his family and husband.

Read More: Emmerdale’s Amelia Flanagan looks ‘all grown up’ as she gets ready for school disco

Recently Robert’s sister Victoria received a letter from her brother.

She decided to show the letter to Aaron’s sister Liv Flaherty, played by Isobel, and together the pair decided to keep the letter secret from Aaron to avoid upsetting him.

But in last night’s episode, Aaron overheard Liv, Victoria and his mum Chas talking about him and confronted them.

They confessed Robert had sent Vic a letter and Liv explained she wanted to give it time to see if Robert would send him a letter.

But Aaron was furious with his family and told his sister that if she ever went behind his back again then they were done.

Aaron later went missing and Liv panicked when she realised there were painkillers missing from the bathroom.

Just caught up on tonight’s #Emmerdale and what incredible performances from @Isobel_Steele & @DannyBMiller.

She panicked he may do something stupid and went out looking for him, where she found Robert’s letter in the river.

But as she went closer to the river she had another seizure and ended up hitting her head on a rock.

Luckily Wendy Posner was passing by and called an ambulance and as Liv woke up, she broke down in tears realising she had a fit again.

When Aaron found out about Liv’s seizure, he blamed himself for stressing her out and was upset that he wasn’t there to look after her.

Later Liv woke up in hospital and the brother and sister had a heart to heart where she told him she was missing Robert and that she feared Aaron would hurt himself and leave her behind.

He told her that he took the last two painkillers for his hand and put the packet in the bin and said: “I just needed a little bit of time on my own just to think.

When she asked him if he promised, he told her he’d be there for her.

Viewers were moved by the emotional scenes and praised the actors for their performances.

The performances of @DannyBMiller and @Isobel_steele in both of tonight’s episodes were exceptional. They convey emotion on screen with an authenticity that makes the viewer believe totally in the heartache and pain their characters are feeling and they produce tears. #Emmerdale

@emmerdale Loved the scenes tonight with @DannyBMiller & @Isobel_steele incredible partnership they have, also the Aaron and Cain/@HordleyJeff scenes. @MaxineAlderton served some really emotional stuff as per. The one with Aaron alone on the bridge was poignant & raw #Emmerdale

Now Aaron has promised to try better for his sister, will he get his life back on track?