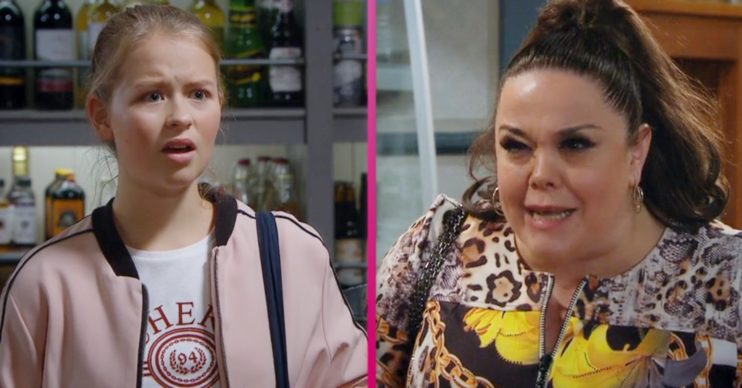 Liv hasn't been on-screen for a while

Emmerdale fans were overjoyed as Liv Flaherty returned to screens after a few months away.

In last night’s episode of the soap (Wednesday, August 26) Vinny and Paul plotted to get Paul and Mandy back together.

They set up a dinner pretending it was for Liv and Vinny, however Vinny told his mum that Liv cancelled at the last minute.

But later Mandy ran into Liv and questioned her on why she cancelled. The confused teenager said she would never turn away free food and didn’t know anything about a dinner.

Although Liv only appeared in the one scene, fans were overjoyed to see her back after months away.

Emmerdale: Where has Liv been?

Over the last few months, Liv hasn’t been on-screen.

Due to the coronavirus pandemic filming has been changed so the cast have to stay at least two metres apart whilst filming. They have also reduced how many people are on set at one time.

Some of the cast including children, over 70s and those with health conditions still haven’t returned to work.

However as cast members have been coming back at different times, it would explain why Liv hasn’t been on-screen for the past few months.

Although she hasn’t been on-screen, Liv has been mentioned quite a lot over the last few weeks.

This week, Vinny mentioned to Paul that he has a crush on his friend. During the lockdown episodes it was hinted that the two had become close as they played an online game together.

In last night’s episode, Mandy made it clear to Liv that Vinny had feelings for her, but does Liv feel the same way? Will the two start up a romantic relationship?

Were you glad to see Liv in last night’s Emmerdale? Leave us a comment on our Facebook page @EntertainmentDailyFix and let us know what you think of this story.