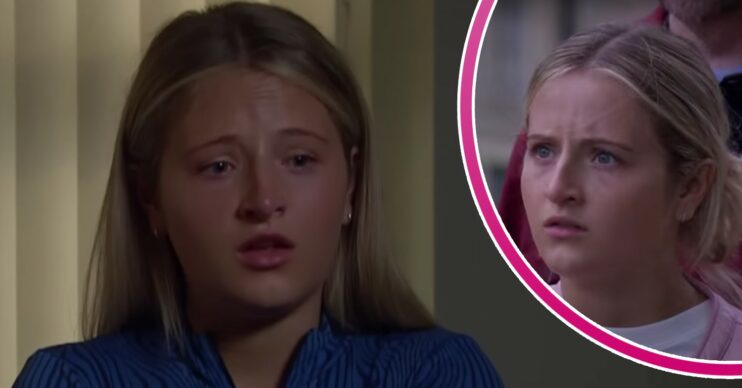 Emmerdale fans are in hysterics after Amelia Spencer blamed God for making her pregnant.

The teenager discovered she was pregnant this week after collapsing at Home Farm.

In last night’s (Friday, July 22) episode, Amelia visited Church to pray on what she discovered.

But she couldn’t quite leave without raging at her god for putting her in this position.

“I know what I did was wrong,” she said.

Pointing out the obvious she added: “I should never have lied to Gabby. I promise I won’t lie again – no matter how bad things might get.

“But why did you have to make me pregnant? Are you testing me? I just know I’m going to have to find a way somehow to tell the truth.”

Emmerdale: Who is Amelia’s baby’s father?

However her blaming God had viewers in fits of laughter.

“Amelia is actually pregnant with god’s baby,” joked one.

“It’s the immaculate conception and a soap first to feature the birth of Christ. 😂 #emmerdale”

A second said: “Amelia blaming god for being pregnant is killing me 😂😂 does she think she’s Mary? #emmerdale”

Another added: “Amelia to God: ‘Why did you have to make me pregnant? Couldn’t you have worn a condom?’ #Emmerdale”

A fourth pointed out: “It wasn’t god that made you pregnant Amelia #Emmerdale”

Meanwhile, just like Mary, Amelia will soon need a stable to live in after Gabby Thomas took revenge on her.

Viewers know Amelia was holding Thomas when she collapsed.

But instead of telling the truth, she lied and claimed he fell out of his high chair.

That sparked a social services investigation, leaving Gabby terrified she was going to lose her son.

And while she didn’t – Gabby vowed revenge and served Amelia and dad Dan with eviction proceedings.

“I’ve only just begun, you mess with my life and I’ll mess with yours,” Gabby told them.

“Feel free to rummage down back behind the sofa for any spare cash for a solicitor because we’ll have ours waiting.

She added: “Let’s make it 48 hours for you to get out. After what you did to my son I want you as far away from my family as possible.”