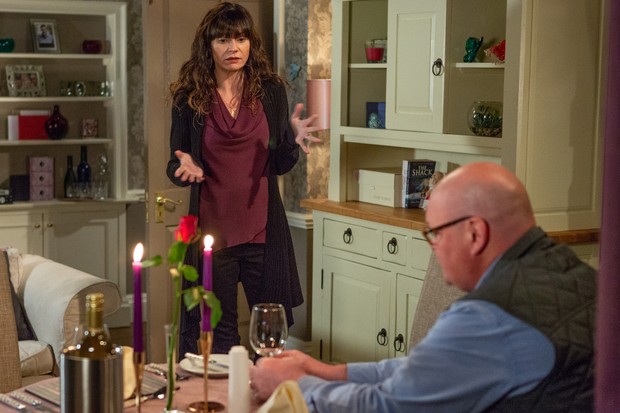 Emmerdale fans “heartbroken” as Chas and Paddy split up

Chas has thrown Paddy out after the devastating loss of their baby...

Emmerdale fans had their worst fears confirmed last night, when Chas and Paddy broke up.

The pair have been struggling ever since the tragic death of their baby daughter Grace, but things came to a heartbreaking head on Thursday (22 November).

During the emotional double bill, Paddy planned a surprise romantic meal for his partner desperately hoping they could get back on track.

But Chas jumped to the conclusion that Paddy wanted to try for another baby and forget about Grace.

During the consequent argument, Chas accused Paddy of not caring about their daughter.

Read more: Emmerdale fans accuse Rhona and Pete of having “no chemistry” as Dawn threatens their relationship

Carrying on the row in The Woolpack, Chas let rip and let all her emotions out – trashing the pub and pulling down the Christmas decorations.

And, in a surprising twist, it was Eric Pollard who comforted Chas by sharing his own sad story… He and his first wife Eileen had a stillborn son 40 years ago.

He told her: “I know this pain. When I saw Eileen I knew that something… dreadful had happened. She told me that our baby boy was born sleeping. That’s what they called it. And they took him immediately away.”

He continued: “We were going to call him Edward. And I was consumed with so much anger. We didn’t talk about it, we couldn’t. And eventually, it broke us apart. We couldn’t reach each other, we were caught up in our grief.”

Despite Eric’s sad warning not to let grief ruin Chas’ relationship, she later told Paddy he had to move out because of their differing ways of dealing with the death of Grace.

The writing has been on the wall since they said goodbye to their daughter last month.

Grace was diagnosed with bilateral renal agenesis in the womb, meaning she had no chance of surviving after birth.

While Chas has been grieving openly, Paddy has been bottling his emotions up – trying to stay strong for his partner.

But it’s not what Chas needed, forcing her to question their relationship.

“I can’t move on from it. I’m comfortable here in this pain. I know it, and I’m terrified of getting over it. The minute I stop feeling it, then I’ll know she’s really gone, and I never, ever want to get to that place.”

She continued: “I don’t want a long, drawn-out miserable time together, where we end up destroying each other because we can’t connect. I’m so sorry Paddy, but I think you need to move out.”

That was tough to watch. I know Chas is grieving but so is Paddy. It’s unfair that she’s accusing him of not caring because it’s obvious how broken he is. #emmerdale

The blowup from Chas was a long time coming. Both her and Paddy really haven’t been communicating their true feelings. I am still up in the air whether these two are a long-term couple or not. #Emmerdale

Fans were absolutely gutted by the split, with one saying: “Chas and Paddy can’t be Over not after everything they have been through.”

Another said: “Who else wanted to sob watching Paddy and Chas? I know I did!”

A third added: “That was tough to watch. I know Chas is grieving but so is Paddy. It’s unfair that she’s accusing him of not caring because it’s obvious how broken he is.”

“The blowup from Chas was a long time coming,” said another. “Both her and Paddy really haven’t been communicating their true feelings. I am still up in the air whether these two are a long-term couple or not.”

Some fans believe the return of Mandy Dingle will affect Paddy’s relationship with Chas when she returns later this year.

It was announced this month that Lisa Riley will come back to the ITV soap for a stand-alone storyline.

Do you think Chas and Paddy should work it out? Leave us a comment on our Facebook page @EntertainmentDailyFix and let us know what you think!