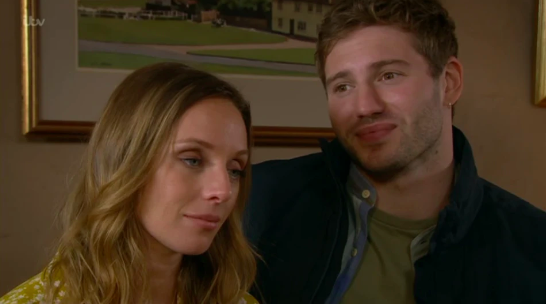 Andrea Tate announced she’s expecting her second child last night – but Emmerdale fans were too busy speculating about the baby to congratulate her!

On Wednesday night (November 27), Andrea – played by Anna Nightingale – revealed she was pregnant.

She blurted out her ‘secret’ after mother-in-law Kim found out the truth about her one-night stand with Graham and the riddle over Millie’s paternity.

In awkward scenes, Kim forced Andrea to sit down with Jamie and tell him the truth about Graham and Millie – but Graham interrupted them in the nick of time.

Andrea is not pregnant.

He handed in his resignation, telling Kim he no longer wanted anything to do with her, because he wants to try and save his relationship with Rhona.

Read more: Emmerdale fans in shock to discover Graham and Kim are married

A confused Jamie asked Andrea what her big secret was, and she told those present that she’s with child.

But fans were left with lots of questions – with some wondering if Jamie was actually the dad, and others doubting she’s even pregnant.

One wrote: “Hahahaha she isn’t pregnant.”

Another agreed, typing: “Andrea is not pregnant.”

Was that just a distraction???

A third asked: “Was that just a distraction???”

Others pondered who the father could be, with one saying: “Are we sure the baby is Jamie’s?”

Another said: “She’s pregnant? By who?”

“Continuing the Emmerdale tradition of kids having two different fathers,” said another.

Are we sure the baby is jamie's

She’s pregnant ! By who ?#Emmerdale

Viewers know that Andrea and Graham had a one-night stand a few years ago, around the time that Millie was conceived.

Graham, understandably, is now convinced that Millie is his daughter.

In upcoming scenes, Kim gets the results of the DNA test revealing who Millie’s real dad is.

But just as she is about to spill the beans, Andrea is rushed to hospital because she fears she’s losing her baby.

Do you think Millie is Graham’s? Leave us a comment on our Facebook page @EntertainmentDailyFix and let us know what you think!