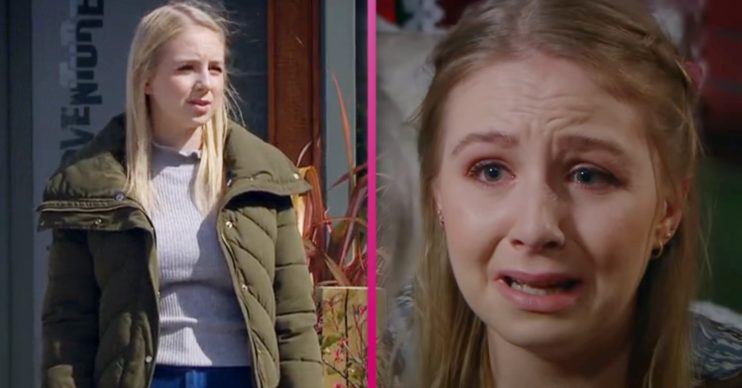 Belle has always been thoughtful and sensitive

Emmerdale fans were left furious that nice character Belle Dingle has turned nasty as she was rude to Tracy in last night’s episode (Wednesday August 26).

Currently Belle is keeping Jamie’s secret – that he is the one responsible for Moira’s hit and run.

Recently, Belle’s nephew Nate was fired from Wiley’s farm, but when he found out what Jamie did, Jamie bribed him into keeping quiet.

In last night’s visit to the Dales, Nate and Tracy ran into Belle and Jamie outside the HOP restaurant and Tracy mentioned they were getting a takeaway to celebrate.

But Jamie responded saying: “Why do we need to know that?”

As Tracy asked if it was ‘be rude to Tracy day’, Jamie said: “Honestly you couldn’t be further from my mind.”

Jamie walked off leaving Tracy baffled. As Tracy asked Belle what his problem was, she replied saying: “He’s just quite fussy who he speaks to. So am I.”

As she followed Jamie, Tracy was left confused by their encounter. But Nate told Tracy he couldn’t afford to fall out with Jamie as he couldn’t risk losing his job again.

However viewers were furious that Belle has suddenly turned into a rude character.

What’s with Belle being rude to Tracey? That is NOT on! #Emmerdale

#emmerdale seriously going off Jamie. Weak, nasty and a coward. Belle is a fool!

Lmao who the fk do Jamie and Belle think they are? Shame shes not as choosy who shes sleeps with as she is who she talks to. Nate needs to get the farm put in his name #emmerdale

Emmerdale: What’s next for Jamie and Belle?

In upcoming scenes, Cain returns from his trip and isn’t happy to hear Jamie and Belle are back together. He demands to know from Belle why she is back with Jamie and she struggles to hide her guilt.

Meanwhile Jamie is concerned when he finds out Belle is helping Moira up at Butler’s farm. Seeing an opportunity, Belle agrees to steer clear of Moira if Jamie convinces Kim to send a client’s business to Butler’s.

But later Moria receives a call from the police saying they have a new witness to the hit and run.

Moira’s ashen as the reality of the incident comes flooding back to her.

Later Nate ends up lashing out and smashes Jamie’s car.

Meanwhile Belle defends her boyfriend in front of Cain. However there’s a sense that something has been broken between herself and the Dingles.

But things get even more awkward later when Jamie overhears Sam bad-mouthing him and fires him.

Sam looks to Belle for support but is shocked when she sides with Jamie. Later Belle arrives at the Dingles’ home to collect her things after confessing to Zak she’s moving in with Jamie.

Do you think Jamie and Belle should be together? Leave us a comment on our Facebook page @EntertainmentDailyFix and let us know what you think of this story.