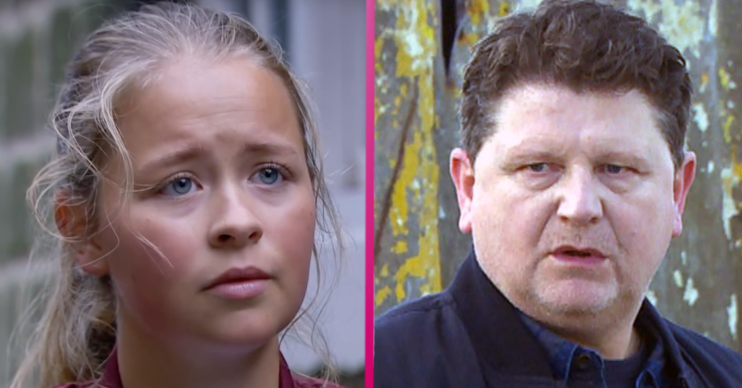 Paul is more dangerous than ever

Gambling addict Paul has been brutally beating his son Vinny in secret to force him to keep quiet.

However this week he went too far.

What happened in Emmerdale this week?

Vinny ended up unconscious and in hospital with internal bleeding after a beating from his dad.

Paul made up a story about finding Vinny after he had been mugged – and insisted on staying by his bedside for when he woke up.

And while some considered him a doting father, Liv has been growing suspicious.

She suggested that he go and clean himself up and rest – letting her watch over comatose Vinny in the hopes he would wake up with her.

However, Paul remained close by and when Vinny woke up, he swooped in and filled his head with the lies he told.

Terrified Vinny had no choice but to lie too – especially when Paul made it clear what he would do if he didn’t.

Paul threatened Vinny’s life – and that of Liv and even Mandy – if his secret were to come out.

However, he said: “If I don’t have a future with Mandy I don’t know what I might do.

“But I can promise you one thing – it won’t be pleasant.

Liv you stupid girl, he will kill you.

“I’ll have nothing left to live for, will I? You, Liv, Mandy – who knows what I’m capable of if I’m pushed into it?”

He added: “We are this close to our happily ever after and I won’t let you ruin that.

“You pretend it never happened – best all round I think, then we can avoid any more unfortunate incidents.”

So what do viewers think will happen?

However, although Vinny lied and backed his dad’s story up, Liv clearly didn’t believe him.

Sneaking outside, she called the police to report what happened – and now fans are worried for her life.

One said: “Liv that’s one big target you just painted on your back.”

A second posted: “Cannot stand Paul. He’s vile. Essentially threatening to hurt Liv or Mandy if he tells anyone. Hope he does get found out.”

Hower another added: “Liv you stupid girl, he will kill you.”