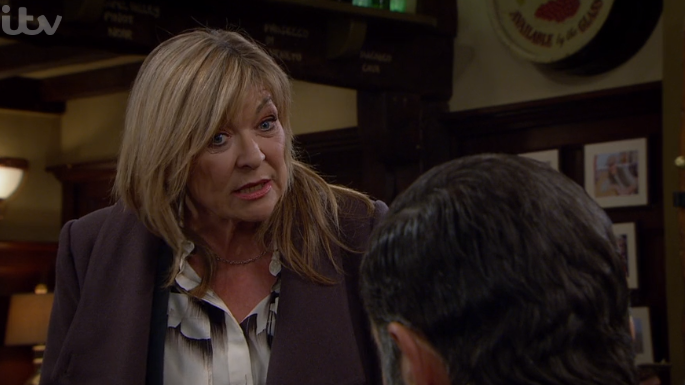 Fans of Emmerdale are in shock after Kim Tate was revealed to have hundreds of thousands of pounds in bank accounts with minimal security.

In just two of her bank accounts Kim had a whopping £600,000 squirrelled away – and just an easily-guessed password for security.

Graham Foster successfully managed to gain access to Kim’s accounts after tricking Ryan into telling her the name of her childhood goldfish – Beelzebub and using that as the password.

But as he sat surveying the two accounts he had managed to get his hands on, fans were shocked that businesswoman Kim didn’t have much security.

One said: “I don’t which bank Home Farm uses but my account security is much higher than that and I haven’t even got any money in it.”

Another joked: “Crikey we all know Kim’s username and password now.”

It’s been a big month for soap character bank accounts as EastEnders fans were left shocked at Dot Branning having more than a million in hers.

Fans knew Dot had a million after the late Dr Legg left her his estate.

But they had assumed she spent most of it buying her house in the soap, however she revealed she had bought it and still had more than £1.2m left.

A shocked fan said: “Is no one gonna talk about the fact that dot has a million quid in the bank or are we all millionaires these days?! #EastEnders.”

A second said: “How on earth has Dot Cotton got over £1m in the bank!! Where have I gone wrong, haha. @bbceastenders #dotcotton #EastEnders #NewYearsDay #NewYear”

Are you shocked at how rich the soap characters are? Leave us a comment on our Facebook page @EntertainmentDailyFix and let us know what you think!