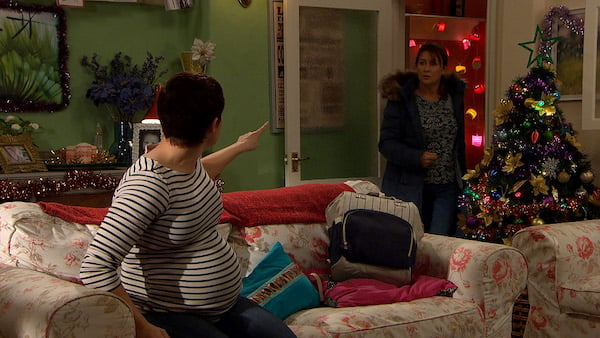 Viewers of Emmerdale were horrified last night, when Wendy Posner abused her position of trust by lying to Victoria Sugden about her unborn baby.

On Thursday (December 5), Vic was alarmed when she started to feel contractions and feared she was going into early labour.

Read more: Emmerdale SPOILERS: Liv’s life in danger when she collapses alone and vulnerable in the woods

Luckily Luke was there to call for help – but, in a move which angered Vic, Luke’s mum Wendy arrived at the house.

Yes, she’s a midwife, but she also happens to be the mum of Vic’s rapist who is making her life a misery at present!

Insisting she could help, she began to inspect Victoria’s bump and listening to the baby’s heartbeat… 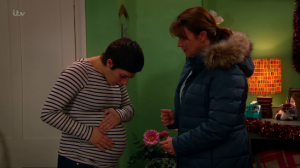 Read more: Emmerdale SPOILERS: Graham and Rhona plan to start new life away from village before his brutal murder

Eventually she told Victoria she was experiencing Braxton Hicks, a phantom labour the body goes through as the due date approaches.

Her son Luke soon realised she had extended the stay to spend time with Victoria and the unborn baby – rather than tell Vic as soon as possible she had nothing to worry about.

Turning on his mum when Vic was out of the room, he said: “When did you know when Victoria wasn’t in labour, that she was safe, how soon did you realise?”

He pushed: “Pretty much immediately, right? You said before that you know within seconds.

“You wanted to take advantage to be near Lee’s kid before he’s even born.”

Wendy insisted she just wanted to be near the baby – even if that meant putting Vic through unnecessary stress.

TF it was a false alarm & Victoria isn't in labour.
it'd be too damn weird to have Wendy deliver the baby.
so Wendy knew straight away that Victoria wasn't in labour smh & she has the nerve to still call Victoria a liar.#Emmerdale

Ffs. I'm getting SO angry watching Wendy 'helping' Vic.
I'd give birth on my own before I let her help. 🤬🤬#emmerdale

Please Aaron get rid of Wendy, I can’t bare this story. 🙄😦🙈

Another said: “Aside from six months of harassment, Wendy is now (as a nurse) lying/using a patient (who in real life she couldn’t treat due to her son being her rapist/baby’s dad, therefore making it too close to home) and STILL no repercussions. Only on @Emmerdale.”

A third said: “I’m getting SO angry watching Wendy ‘helping’ Vic. I’d give birth on my own before I let her help. #Emmerdale.”

“Please get rid of Wendy, I can’t bear this story,” said one more.

Those watching from home recently slammed the soap for what they believe is a “sick” and “perverse” plot which “sends the wrong message to victims of abuse”.