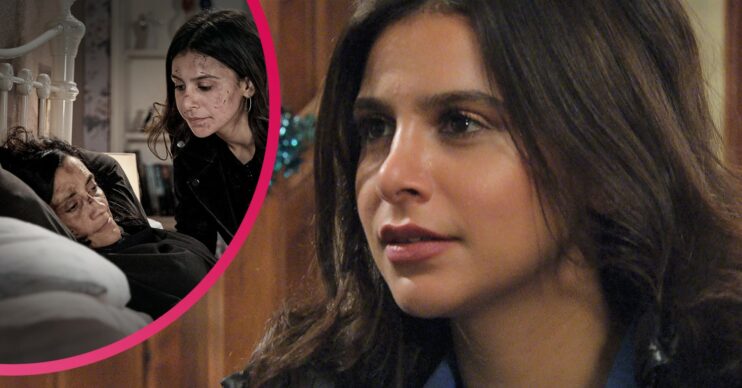 Emmerdale fans have demanded the soap be moved to post-watershed as Meena Jutla’s murder storyline gets darker.

Meena has murdered four people, three of her victims being residents of Emmerdale.

Her sister Manpreet started to get closer to the truth and when she met up with Carol, the sister of Meena’s first victim Nadine. Carol told Manpreet she believes Meena killed Nadine.

When Manpreet confronted Meena over her behaviour, she tried to kill her.

However the sisters ended up getting caught up in the Woolpack explosion.

Manpreet went into a coma. But she soon came out of it and pretended not to remember the events leading up to the explosion.

Manpreet was soon discharged from the hospital and Meena assured she would take care of her sister.

However Manpreet fell into Meena’s trap and Meena realised her sister does remember everything and is holding her captive.

Read more: Emmerdale fans beg for Vanessa and Charity to get back together as Vanessa returns

It became clear Meena has sinister plans for her sister, who she has tied to a bed. But fans aren’t impressed with some requesting the episode is pushed back to after the 9pm watershed.

@Ofcom can you look into tonight's episode was a bit to much before 9 pm! Definitely not right #emmerdale

This is supposed to be a SOAP on early evening not an after 9 drama. End this Meena story #emmerdale going too far.

#emmerdale This Meena farce.. Disgusting and way before the watershed.. A "NHS nurse" too.. I'm switching off soon.. 🤦‍♀️

All this and not even 8pm. What happened to the 9pm watershed?#emmerdale

So much for the watershed. There’s more psychos in the soaps than in proper crime dramas. What happened to ordinary folk.#EMMERDALE

Meena killed her best friend Nadine Butler before she moved to the village.

She then went on to kill Leanna back in July. Leanna found out Meena killed Nadine and although she promised to stay quiet, Meena murdered the teenager.

In November Meena went on to kill Ben Tucker who found evidence of Meena trying to kill Victoria.

Will you be watching Emmerdale tonight? Leave us a comment on our Facebook page @EntertainmentDailyFix and let us know what you think!